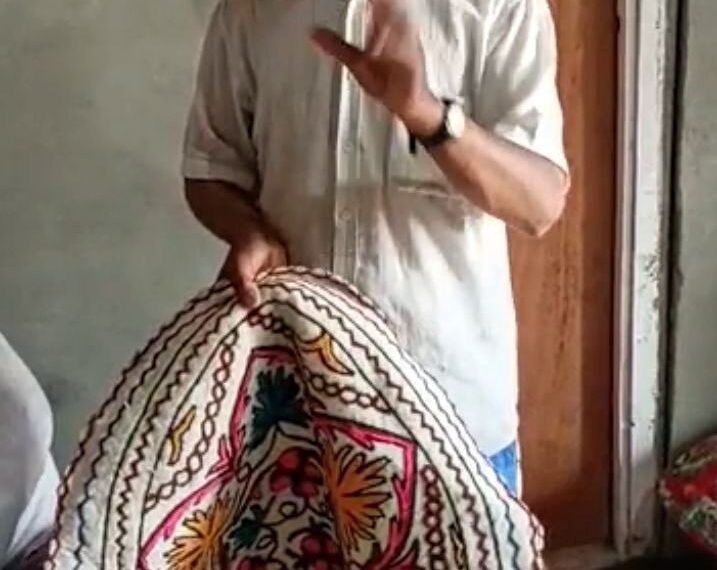 Srinagar: Kashmir  ‘namdas’ (rugs) woven by Bashir Ahmad Bhat would get exported across the world. However, Bhat of late has taken to making mattresses due to a dip in demand for ‘namdas’ – a rug made of sheep wool.

Though the government is trying hard to revive the dying craft of namda weaving, several other weavers are looking for different options.

“There was a time when our namdas were in great demand. We would export these rugs to all counties especially Japan, Germany, and the US but then there was a dip in demand. The situation went from bad to worse in the wake of the Russia-Ukraine war and now our orders are pending. I am forced into mattress-making for the time being till the demand for namdas is back,” said Bhat, who has a namda-making unit at Nowhatta in the old city.

He said he was already the last member of the family into namda weaving as his children were not interested in the craft.

“Our progeny is not interested in namda-making as it does not fetch good rewards. We only hope that the government will take concrete steps to revive the art,” said Bhat.

Another weaver Mohiuddin too has taken to making mattresses now. “Making mattresses is not as profitable as namda making used to be once but it gives you a steady income. People in Kashmir still prefer to use handmade mattresses and you will find these in all households,” he said.

An official of the Handicrafts Department said they were trying hard to revive the art of namda making.

“The Handicrafts Department is trying hard for its revival and restore its potential to empower people associated with the craft. We have already put the namda making unit of Bashir Ahmad Bhat on the map of the craft safari and we are endeavoring to further boost the handicrafts sector in Kashmir,” the official said.

The ‘Crafts Safari’ has been started by the Handicrafts Department in the wake of Srinagar making it to the coveted list of the United Nations Educational, Scientific & Cultural Organisation (UNESCO) in Crafts and Folk Arts Category for the year 2021.

Interestingly, tourists too have started showing interest in the safaris where they get a chance to buy products directly from the artisans besides exploring the varied Kashmir crafts.

Centre had launched a project to revive namda making in Kashmir last year. The project will benefit 2,250 people of 30 namda clusters from six districts of the Valley including Srinagar, Baramulla, Ganderbal, Bandipora, Budgam, and Anantnag.