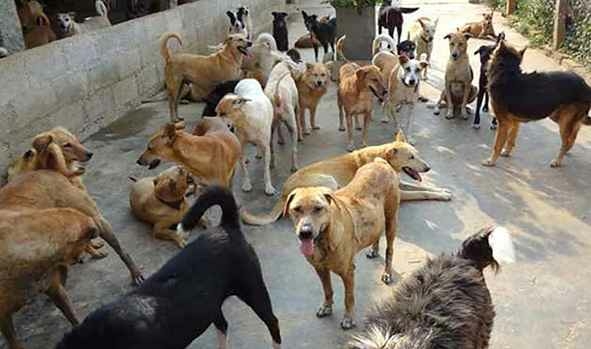 Jammu, Nov 07: Though the High Court has directed Housing and Urban Development Department (H&UDD) to provide required assistance to Srinagar Municipal Corporation for controlling the menace of stray dogs in the summer capital Srinagar, the miseries of people faced due to these canines seem to be unending.
Stray dogs struck terror in Baramulla town of north Kashmir on Tuesday morning. The canines attacked nearly 50 persons, including women and elderly. However, what compounded the misery of the victims was the non-availability of enough stocks of anti-rabies vaccine.
People believe here that street dog numbers continue to affect people in majority of the areas of Srinagar city and other towns of the Kashmir and this will be the trend if the authorities continue to do nothing. “The control methods used are inadequate, as trapping is rarely a method that is considered and is totally undervalued and underutilized,” one of the local residents of Srinagar told KNS.
People blame the authorities for not taking appropriate steps to reduce the increasing dog population. The cases reported with Socio and Preventive Medicine Department at the SMHS Hospital, the only tertiary care hospital in the Valley, has registered hundreds of dog bits during the recent years.
In Srinagar alone, hundreds of people were bitten by canines. According to official data, there are about 48,000 dogs in the city, but unofficial estimates say the number is about 1, 00,000.
To control the canine population in the city, the Srinagar Municipal Corporation (SMC) has taken the process of sterilization, but people said that it was a long process and there should be some short-term plan by the SMC to stop the cases of dog bites.
“Sterilization is a long-time process. The government is not serious in solving this grave issue. Something needs to be done timely to check the menace,” said Habib-ullah, a resident of Srinagar.
Stray canines can be seen roaming on streets, chasing cars, pulling down bicycle riders and often attacking pedestrians and schoolchildren.
The situation is worse in the outskirts where the municipal corporation is not that active is checking the menace.
According to experts, the reason behind the ferocity of the dogs is the high-protein offal they are fed regularly because of the dietary habits of residents of Kashmir, where mutton and chicken are a staple diet.
The inhabitants of Bemina MIG colony area complained that even though hundreds of dogs’ prowl in the area, the authorities had failed to check the menace. “For the past four years the SMC admits that the stray dog population has reached alarming proportions with over one lakh prowling in the City. Still, the corporation has failed to act,” Said senior citizen Ajaz ahmad of the area.
“We fear that the dog population if kept unchecked could trigger fear psychosis among people. The dog issue needs to be dealt with seriously or else by four years dogs may outnumber Srinagarities and they will victimize every one of us,” he said. Despite repeated attempts the SMC officials couldn’t be contacted.
It is to mention here that a division bench of Chief Justice Badar Durrez Ahmad and Justice Ali Muhammad Magrey issued the direction after it was informed that there was only one centre at Shuhama, for controlling the birth of the stray dogs at present.
“In order that SMC is able to achieve the objectives, they will need full financial assistance and logistic support from H&UDD. A request has already been made by the SMC on 29 March 2016 and 16 May 2016,” the court had said.