Sopore Doctor is Twitter’s ‘Superman’ of the world 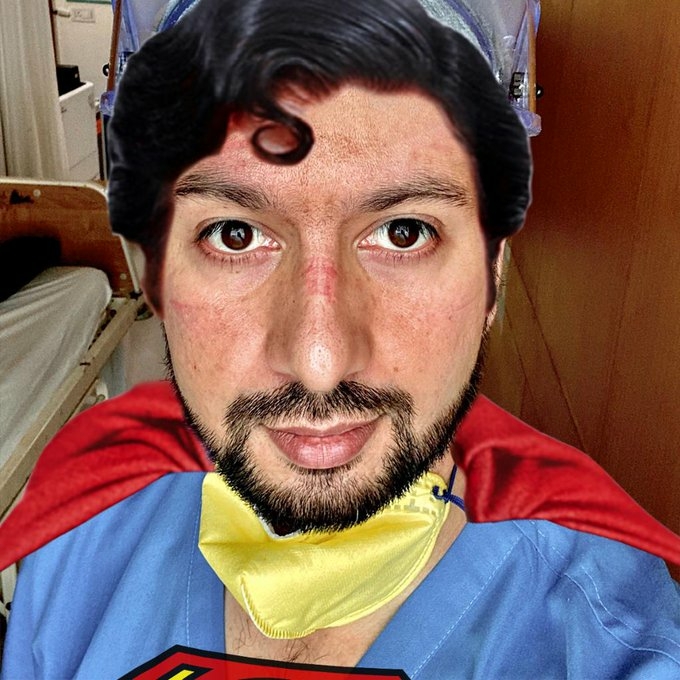 Srinagar: He is now a superman with a signature Clark Kent curl hanging on his forehead, an S on his chest, and a red cape on his blue gown that fitted perfectly with the blue dress the character wears in comics and movies.

No, we aren’t describing a scene from a Hollywood flick but Twitter’s recent tribute to all the health workers fighting the coronavirus pandemic around the world.

And the face of this tribute is that of a Kashmiri medico, who didn’t know he will be Twitter’s Superman doctor.

Like thousands, Dr Shahnawaz B Kaloo, a Sopore born doctor practicing in Delhi, too shared his photo wearing a blue medical gown, a mask, a large visor-like goggles resting on his head, after a day of strenuous work at the hospital. His face showed clear signs of bruising doctors get because of continuous usage of masks. The time stamp shows he uploaded the photo at 9:34 pm on Friday.

Twenty minutes later, Twitter responded to Dr Kaloo with his selfie photo-shopped and a short message: “You look SUPER.”

Laughing over it, Dr Kaloo told The Kashmir Monitor that he had casually uploaded the photo.

“I just uploaded my photo in reply to Twitter asking people if they need a selfie. I didn’t know I will get a reply from them with me turned into a superman,” he said.

Since Twitter shared his photo, Dr Kaloo has received scores of messages, including direct messages as well, where people thank him and the health workers who are risking their own lives to save others.

“Prayers for all of you Frontline Angels now a days,” read a comment on the doctor’s superman photo.

Dr Kaloo works as interventional radiologist at Max Hospital in Saket where he is treating patients suffering from liver issues.

The hospital has around 30 COVID-19 patients.

“Even a few staff members including a nurse have tested positive. I too am supposed to be tested tomorrow,” he said.

The doctor lives with his wife and two children and, as such, has to take lot of precautions when he returns home after his long shifts in the hospital.

His wife too is a doctor at Jamia Hamdard.

Following Kashmir cases closely, he said that “we are in the middle of the pandemic and the lockdown may again be extended.”

“We don’t really expect it (the virus) to go very soon, we need to be patient. Those of us who are not into essential services should stay home,” he said.

The doctor suggested parents to make arrangements for their kids’ education at home.

“I don’t see schools opening for another three months at least,” he said.

Dr Kaloo, an alumni of Government Medical College Srinagar, has worked as a Medical Officer in J&K Health Department.

In 2015, he wanted to specialise in interventional cardiology and got selected for a 1-year fellowship at Institute of Liver and Biliary Sciences (ILBS) Vasant Kunj after topping the all-India level entrance for it.

Dr Kaloo has kept his phone number public and receives calls from patients who reach to him over the phone during these extraordinary times.