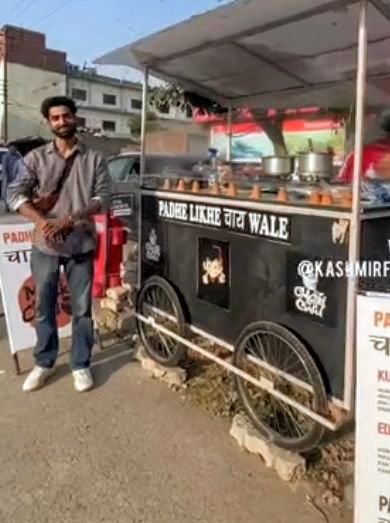 Known for having a unique name for his stall, he has also caught everybody’s attention for selling tea in edible cups made from grain.

His customers love the concept of eating the cup like a biscuit after sipping tea.

“I have done an MBA but I was not interested in working for somebody else. I would make tea for my mother at home and she found it very tasty. Later, I decided to set up my tea stall and came up with the name ‘Padhe Likhe Chai Wale’ because of my educational background. Though I wanted to do something on my own, many tell me I have been inspired by our Prime Minister (Narendra Modi). Anyway, there is nothing wrong in getting inspired from the prime minister even as I was interested in having my own independent business,” said Kulbushan, who can be found selling tea in Jammu city.

“We have different tea varieties including Kashmiri chai but our masala chai is our specialty. We provide tea in both kulhad or edible cups,” he said.

Kulbushan feels that the unemployed youth should start their ventures and that the educated ones can make a difference.

“An MBA pass-out is supposed to come up with new business ideas. Therefore, I did some research and came across these edible tea cups and an eye-catching name for the stall. ‘Koi bhi kaam chota bada nahin hota’. The educated youth should not feel shy and start their ventures and follow their dreams,” he said.

Popular Valley-based food blogger Omar Rather of ‘Kashmirfoodgram’ fame said Kulbushan was an inspiration for the youth across the country.

“Kulbushan is an inspiration for the youth of the country. Despite having an MBA degree, he started his tea stall. His educational qualification came in handy as he started serving different tea varieties in kulhad and edible cups. He also came up with a unique name ‘Padhe Likhe Chai Wale’ that has made him very popular on social media. His masala tea has secret ingredients that he does not reveal and I have personally seen that people from different parts of Jammu come to his stall to relish the same,” said Omar.

“And he has maintained a lot of hygiene around his stall. His masala tea has become very popular and has started attracting food bloggers from all over. I am sure his popularity will keep on increasing in the coming times. Serving tea in edible cups is a fairly new concept and it is good to see our J&K youth following the trend,” he added.