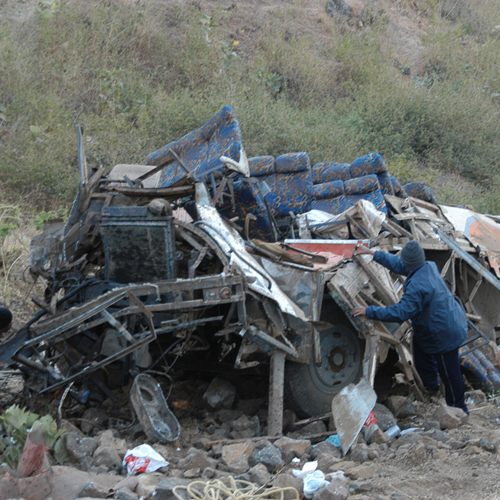 Srinagar, Oct 9: Taking suo-moto cognizance of the last week’s deadly accident which claimed 22 lives in Ramban district, the State Human Rights Commission on Tuesday directed IGP Traffic J&K to provide details of road mishaps in the State from January 1 till date.
The details shall include a number of persons killed and injured, Chairperson of the Commission Justice Bilal Nazki said while taking the suo-moto cognizance regarding road accident in which 22 persons were killed and 13 others were injured.
The chairperson observed that a large number of road accidents take place in the state which takes many lives.
“The reports suggest accidents prima facie to be the result of lack of supervision by the Traffic authorities and also because of conditions of roads,” the commission said and issued notices to Director General of Police, IGP Traffic J&K, Secretary Public Works Department to file their responses within six weeks.
“IGP Traffic J&K has also be directed to file complete data regarding accidents which have taken place in the State from 1st January 2018 till date giving details of the number of persons killed and injured,” the commission added.
Last year, 926 persons died in over 5,000 road accidents across the state. The state recorded 958 deaths in road accidents in 2016, 917 in 2015, 992 in 2014 and 990 in 2013.
As per reports, 76 people have been killed and 472 injured in over 350 road accidents in twin districts of Doda and Kishtwar in Chenab Valley alone this year. Reports said twenty-four persons were killed and 287 injured in 158 road accidents in Doda district while 52 persons lost their lives and 185 were wounded in 207 road mishaps in Kishtwar district.
In the last two months alone, at least 50 persons were killed in road accidents in the Chenab Valley districts.