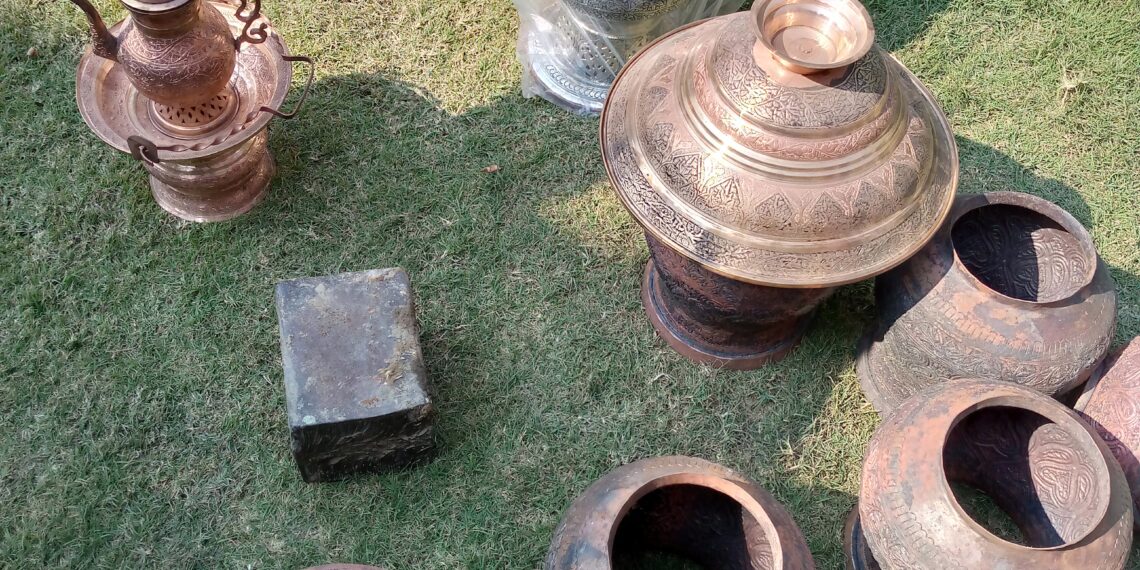 Srinagar: Few coppersmiths in the Kashmir valley have shifted focus towards making jewellery and decorative items but others have stuck to the traditions.

Despite a slump in sales, Riyaz Ahmad Khan from the ‘Shehr-e-Khas’ area is one such coppersmith who continues to make the traditional items like bowls, samovars, and ‘tash-naers’.

“Copper prices are on a rise and we do not have too much work like before. Due to competition in the market, few coppersmiths are trying new products like decorative items and jewellery but I continue to make the traditional items like bowls, samovars, and ‘tash-naers’. Though our business is not thriving like before, we remain busy during the wedding season in the summers. In winters, we usually get orders from rural areas of Kashmir,” Khan told The Kashmir Monitor.

He said he had been in the business of making copper products since 1980. “I did not study much and I then started my family business at a young age and right now five people work at my unit,” he said.

Bilal Ahmad War is another coppersmith from Nallah Mar in the old city and he too is known for his samovars.

“We make bowls, taesh-naer, trays and samovars. All these are an integral part of the Kashmiri tradition. Now-a-days people want samovars and trays with intricate designs especially for marriages. We customise our products accordingly,” War told The Kashmir Monitor.

An official of the Handicrafts Department, Kashmir said both Khan and War were known for the stylized and one-of-a-kind sculptures of traditional copperware items.

“The most cherished item of copper work is a samovar, which is either a copper teapot or a copper kettle adorned with intricate carvings. Both Riyaz Ahmad Khan and Bilal Ahmad War are capable of producing the most beautiful copper chinars, bowls, taesh-naer, trays and samovars. They have created one-of-a-kind sculptures and engraving designs,” the official said.

He said the units of both the coppersmiths had been kept in the itineraries of the craft safaris that were started last year after Srinagar made it to the coveted list of the United Nations Educational, Scientific & Cultural Organisation (UNESCO) in Crafts and Folk Arts Category for the year 2021.