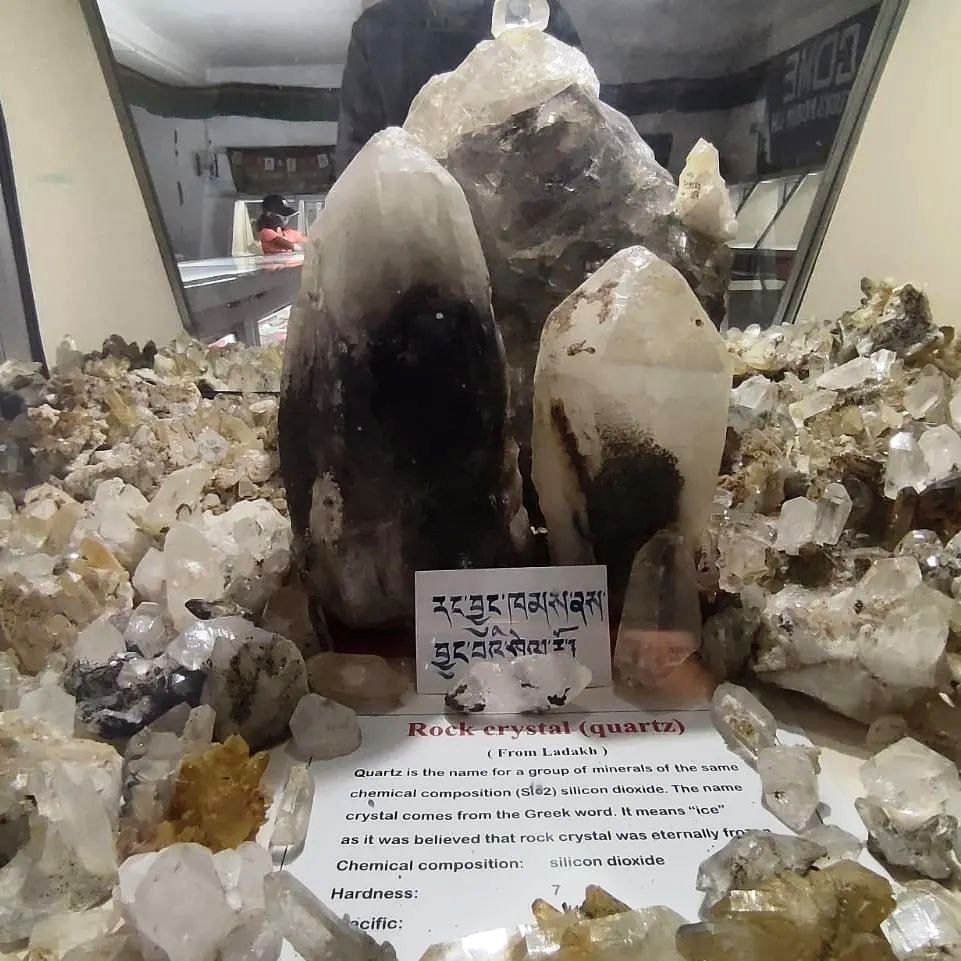 Srinagar: Ladakh is often called a ‘cold desert’ but lying underneath its bare mountains and soil is an undiscovered treasure of precious rocks and minerals. And a slice of this treasure can be found preserved in the ‘Ladakh Rocks and Minerals Museum’ located near Leh’s Shey Palace and the historic Amir Kabir mosque on the old Lhasa road.

From fossils of the prehistoric era and meteorites to precious and rare stones and gems, the museum’s collection has started to attract travelers from all over the world.

Moreover, the travelers get amazed further when they discover that all the artifacts have been collected by the founder of the museum – Phunchok Angchok Togo.

“I was interested in collecting rocks from a young age. Initially, I would look for rocks for spiritual purposes and used to wander in the mountains. Gradually, my interest grew and so did my collection. I would consult geologists, and gemmologists initially and now they consult me as I have more knowledge about rocks and minerals. I have been collecting rocks and fossils for over 30 years and have spent days and weeks at a stretch in mountains to collect the same,” Phunchok told The Kashmir Monitor.

He said he shifted his collection to a museum when he faced space constraints at home.

“My wife would scold me when my collection increased as there was no space at home. I then shifted to a museum and also got it registered. Now I have hundreds of rocks and other collections. I also have over 100 fossils. Some are millions of years old. Even geologists are amazed when they see my collection of fossils. I have also collected meteorites,” he said.

Phunchok said though the Ladakh region was considered a land of ‘bare mountains’, it glittered underneath.

Now, Phunchok is hoping for some government assistance so that he can display his collection in a better way.

“Whatever I have done so far is out of my pocket. If the government provides me assistance, I would like to have a bigger museum where I will have more space to display my collection. My aim and objective are to preserve the treasures of the Himalayas (Ladakh) and display them. I also want to do further study and research about rocks, minerals, meteorites, and fossils. I also want to educate the students, researchers, geologists, gemmologist, mineralogists, paleontologists, pedologists, pharmacologists, and tourists,” he said.

Wiqar Bashir, a recent visitor to the museum, said Phunchok had brought treasures from the trans-Himalaya region ‘under one roof.

“Phunchok Wanchok’s collection is a result of sheer passion and decades of travel in this region. Nothing deters him from exploring and collecting. Many years ago he slipped into a crevasse near the Haksho pass in the treacherous Zanskar Himalaya and was luckily rescued without a major injury but had to bivouac in extreme conditions. The museum located near the Shey Palace and historic Amir Kabir mosque on the old Lhasa road is an amazing collection of rock and mineral treasures from the trans-Himalaya region under one roof, a must-visit for specialists and general people alike,  the small zoomorphic rocks collection, especially the robin is a delight to see,” Wiqar told The Kashmir Monitor.