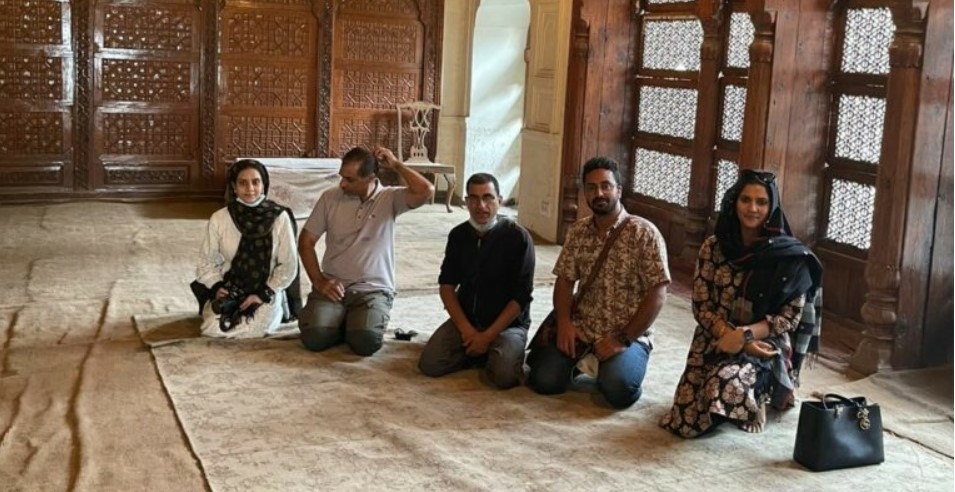 Srinagar: A 120 year old heritage house in Zadibal has become the melting pot of Shia-Sunni cultures in the Kashmir valley.

‘Rizvi House’, which serves as the starting point of  the weekly ‘Dark-e-Azadari’ heritage walk, now takes walkers to the lesser-known ‘Shia spaces’ in the old city in an attempt to remove myths about the community and also develop a connection with the Sunnis.

“We organized a first of its kind walk titled ‘Dark e Azadari – Journey to Aza Khana of Zadibal’ on August 30. Kashmiris staying here and outside the Valley from both Shia and Sunni took part in the walk. Our main aim was to tell people about the traditions and uniqueness of ‘aza’ in Kashmir and what Kashmir has contributed to ‘marsiya’ literature. We took them to places in Zadibal like Jalali House, Rizvi House, and Malik House and we also wanted to remove myths about Shias and develop a bond with the Sunni community,” said Iliyas Rizvi, an oral historian, and art, craft, and heritage researcher.

He said the response was overwhelming and the walk now had become a weekly affair, and that the Rizvi House had become its starting point.

“On August 30, we started the walk at 3 pm and it concluded at 10 pm. We had another walk yesterday and given the response, we have now decided to make these walks a weekly affair. The participants are enthusiastic as the old city has a lot to offer to heritage lovers and those who are interested in Shia spaces. The starting point of the walk is the 120-year-old Rizvi House that over a century back doubled up as a ‘dewan khan’.   Earlier, only marsiya was held during the first 14 days of Muharram but later we started having majlis where sermons were also delivered. While religious events related to Muharram are still held at this house, we are glad that it is now bringing together the Shia-Sunni communities by serving as the starting point of our weekly heritage walks,” he said.

Gouhar Siraj, a cultural and herito-historical researcher based in Delhi, said the walk provided an insight into the Shia community.

“The Shia world continues to be an alien for most Sunnis and that needs to change. After the walk, I was pleasantly surprised to know that the Shias are a deeply religious and morally conscious community that is uniquely Kashmiri in its character. The exposure of Shia culture and spaces, and the removal of wrong myths left a positive impression on me,” he said.

As the walk is also being held to aware the younger generation about the old city’s heritage, Ambreen Anjum, who participated in the walk, said she was surprised to know that the relic of Hazrat Imam Hussain (A. S) could be found at the Imam Bargaah in Zadibal.

“For someone like me who frequently goes to Dargahs, it was surprising to know that there’s a relic of Hazrat Imam Hussain (A.S) in Imam Baargah, Zadibal. The ‘mujavir’ there was kind enough to welcome us and tell us about the journey of the relic to Kashmir,” she said.