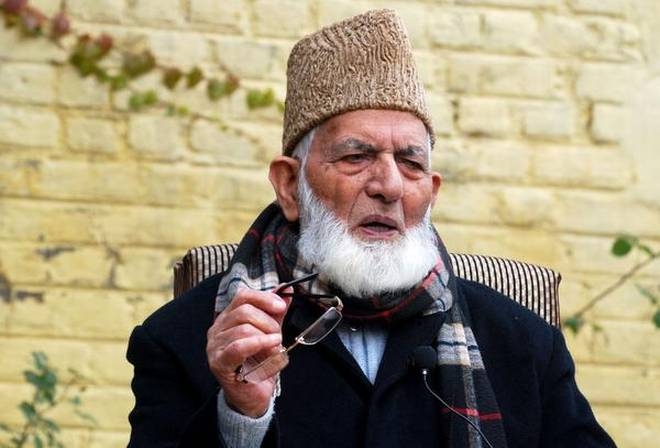 “They are following their bigoted dogma and as such creating war euphoria in region,” said Geelani in a statement.

Geelani, while referring to Rajnath’s statement wherein he has directed the forces to ‘’shoot limitless bullets to Pakistani forces”, said that “no sane person can say like this”.

“Such rhetoric’s and senseless statements instead of solving the issues will multiply the problems and any flare can lead to a full-fledged nuclear war between two countries,” said Geelani.

Commenting over the statement, he said this will only add fuel to fire and advised Indian leaders to shun their “stubborn attitude and accept ground reality”.

Geelani said that he Kashmir issue is “serious and cannot be resolved through rhetoric or provocative statements and while blaming Indian leadership for their haughty egoistic approach”.

Geelani, in his message to UN general Secretary, appealed to take notice of “provocative statement” of Rajnath and steps for its resolution as per resolutions accepted in United Nation Organization.

“We urge the international community to take cognizance of the gross and systematic violations of human rights taking place in Jammu and Kashmir and use its influence with India to bring an end to brutal killings and strangulating the genuine voices.”

Meanwhile, Geelani on Monday expressed gratitude to government and people of Pakistan, its army for their “political, moral and for their unflinching support to people of J&K”.