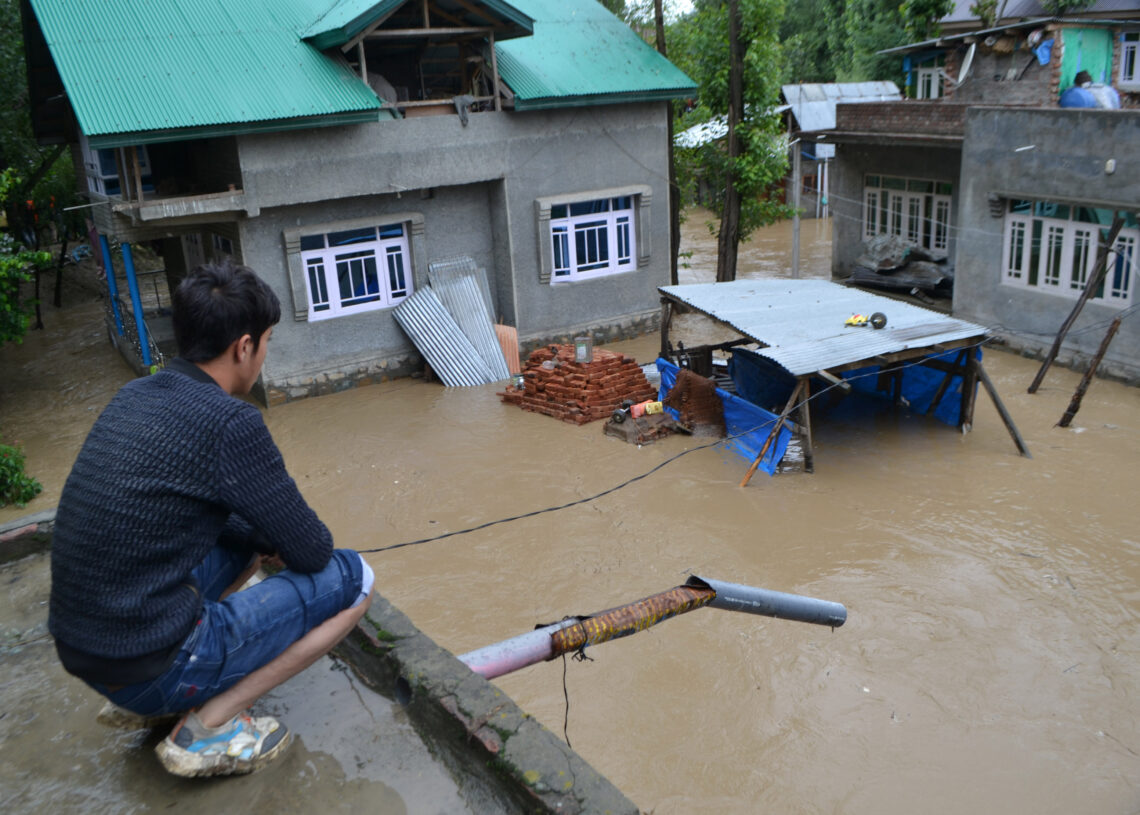 Srinagar: Moderate to heavy overnight rainfall across the Kashmir valley sparked a flood fear among the people as water levels at Sangam and Ram Munshibagh touched the flood declaration marks.

Traffic on the Srinagar-Jammu national highway continued to remain suspended for the second consecutive day today even as schools in several districts of the Valley remained shut due to water logging and flash floods.

Shalimar in the city outskirts received maximum rainfall in the Kashmir valley during the past 24 hours even as the Meteorological Department has forecast dry weather conditions from tomorrow.

An official of the MeT Department said Shalimar received 78.6 mm of rainfall till 8.30 am on Wednesday. However, the Rambagh station where the MeT office is located received 57.8 mm of rainfall. Similarly, Qazigund, Pahalgam, Kokernag, Kupwara, and Gulmarg received 75.2, 46, 45.2, 34.8, and 69.6 mm overnight rainfall respectively.

Later, light rainfall was received during the day on Wednesday and Srinagar received only 2mm of rainfall from 8.30 am to 5.30 pm. The higher reaches of Kashmir and parts of Gurez and Baltal received fresh snowfall.

Director Meteorological Department Sonam Lotus said from Thursday onwards, there was no forecast of any major rainfall in the coming week.

The Advisor delved upon the officers that men and machinery should be geared up and deployed at all the vulnerable spots to avoid any exigency. He asked the officers that sandbags and other required material should be kept available near the Jhelum embankments so that any kind of breach is rectified in time.

A breach in a temporary diversion along the banks of Vaishov stream as Chamgund in Kulgam was reported. Several rescue operations were carried out in the district by the police and civil administration along with locals and teams from SDRF during which several families were rescued. Several nomadic families including three members of the family were rescued along with their flock after they were trapped in the Nallah Veshow near Pariwan village. Trapped persons from Ashthal and eight families from Khrevan Lassipora and other areas were also rescued.

The Army too carried out rescue operations on the highway. “Approx 400 cars, SUVs, trucks, and buses were stuck between Dalwas South of Chenani Tunnel and Banihal. The area between Ramban and Nachlana has been badly affected. In a swift response, the Indian Army launched two columns of rescue teams from Digdaul in the affected areas to evacuate stranded passengers to safe locations. In addition, the Indian Army also provided hot meals and security to approx 300 stranded passengers including 100 children, women, and drivers of vehicles throughout Tuesday night, who were stuck near Ramsoo,” a Defence spokesman said.

The MeT office issued an advisory for intending travelers. “Due to continuous rain since the last few days, landslides, and flash floods have occurred at many vulnerable places, mainly in hilly areas. People are once again advised to travel on Srinagar-Jammu, Mughal Road, etc. only after confirming the Road Status from the Traffic Police,” the advisory said.

The rainfall forced the authorities in several districts of Jammu and Kashmir to suspend class work in schools.