Rahul takes tuition to dream, what to speak: Smriti 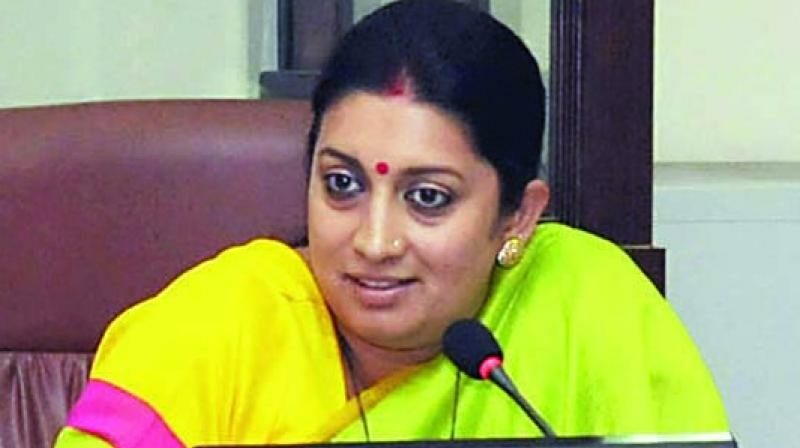 New Delhi: Union Textiles Minister Smriti Irani said that Congress president Rahul Gandhi takes tuitions to dream and learn what to speak and what not to.

Speaking to ANI, Irani said, “Rahul takes tuition to dream and the current video shows that he doesn’t trust his own words but he relies on others who teach him what to speak. It is a warning for the people of this country to know that he is not eligible for any electoral post.”

Her statement comes after a video of Rahul Gandhi and Jyotiraditya Madhavrao Scindia going viral on various social media platforms where one can see Rahul Gandhi addressing media along with various Congress leaders after the party announced the farm loans waivers in Madhya Pradesh and Chhattisgarh.

Before Rahul Gandhi spoke, Scindia gave him advice stating that “you need to say what (PM) Modi (referring to waiving farmers loan)…could not do, I have done. And, don’t ask questions.”

Smriti Irani is among those who took a jibe on it by sharing the same video on Twitter. “Aajkal sapne dekhne ke liye bhi tuition leni padti hai??? (These days, you need tuition classes just to dream???) Irani tweeted.

Talking about development works taken during the four and a half years long regime of Prime Minister Narendra Modi led Central government, Irani said: “Under the leadership of Prime Minister Modi, whether it is the interest of the nation, farmers or common men, every sector has witnessed remarkable improvement.”

“In the 2019 Lok Sabha polls, the people will give blessings to the BJP after seeing the development under the BJP regime,” she said.