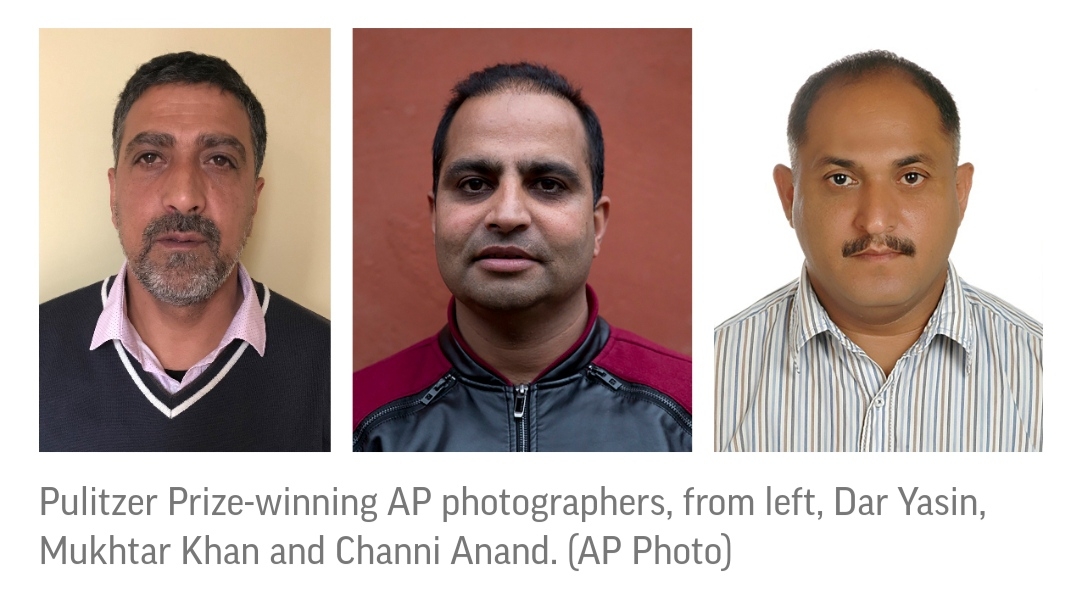 Srinagar:  An eerie silence has enveloped the national television channels after three Associated Press (AP) photojournalists from Jammu and Kashmir were declared winners of 2020 Pulitzer Prize for feature photography.

Mukhtar Khan, Dar Yasin of Kashmir and Channi Anand of Jammu have been awarded for capturing “striking images of life” during 2019 lockdown, when Centre abrogated the special status of Jammu and Kashmir and divided the state into two union territories.

Soon after the awards were announced, most of the national television channels surprisingly blacked out the news. Even the liberal and independent news channels did not run a scroll.

Only news portals and online editions of newspapers including The Wire, The Week, Hindustan Times, Outlook, News 18, and NDTV among others carried the story. Barring a few, all websites were sourcing news from the wire agencies. Few independent websites, however, were carrying the stories from their correspondents.

Indo-Asian News Service (IANS) carried a story about the ‘controversy’ created by the Pulitzer Prize board by questioning “India’s legitimacy over Kashmir, calling the valley a “contested territory whose independence” was revoked and “executed through a communications blackout”.

Minutes later Dar hit out at Aarti for what he termed as “embedded journalism”.  “When you and your ilk were busy doing embedded journalism—riding in SUVs with protection in posh Srinagar areas to paint ‘normalcy’, we Kashmiri photojournalists were navigating coils of concertina & barricades to depict ground reality. Pulitzer Prize is the result of our body of work; rants in your case,” he said.

Contrary to the skewed coverage by television channels, international media went the whole hog to highlight the achievements of the trio. From Al Jazeera to The New York Times, there was fairly good coverage of the feat achieved by Kashmiri journalists.   “AP’s Kashmir photographers win Pulitzer for lockdown coverage,” reads the Al Jazeera headline

Even the government seemed to have withdrawn into the shell by not reacting to the achievement of the sons of the soil. However, in the afternoon, former Congress president Rahul Gandhi broke the jinx and congratulated the trio.

“Congratulations to Indian photojournalists Dar Yasin, Mukhtar Khan and Channi Anand for winning a Pulitzer Prize for their powerful images of life in Jammu & Kashmir. You make us all proud,” Gandhi tweeted.

Former chief minister Omar Abdullah also congratulated the trio for the feat.  “It’s been a difficult year for journalists in Kashmir & that’s saying something considering the last 30 years haven’t exactly been easy. Congratulations to @daryasin, @muukhtark_khan &  @channiap on this prestigious award. More power to your cameras,” he tweeted

Ticket back home costs up to 1 lakh: Indians stranded abroad to be evacuated in 64 flights