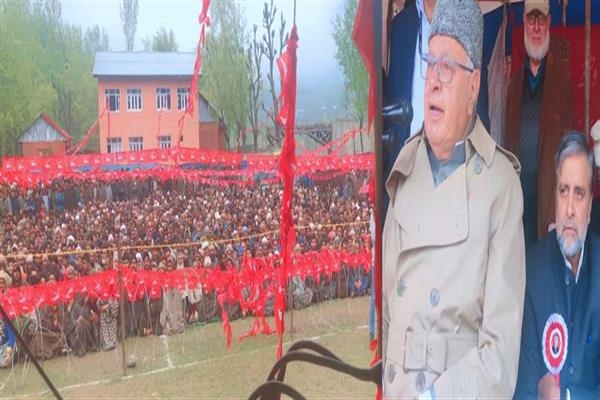 Srinagar, Apr 13: Jammu and Kashmir National Conference President Dr. Farooq Abdullah on Saturday asserted that the ensuing elections shall decide if the state of Jammu and Kashmir is able to be a part of the union with dignity saying that the people of state are directly fighting BJP and their cronies here through ballot for the protection of their identity.

While addressing two separate public gatherings at Babademb, Khanyar and Kangan, Party President said that people have to vote for preserving the country’s secular disposition, integrity and unity. “This election will decide, if we are able to live with our neighboring country in peace. The general elections are also significant since it is a direct fight between falsehood and truth. However, no matter how much they try, falsehood is bound to perish. Present elections will also decide if the people of the country irrespective of their caste, creed are able to live with dignity. So it is imperative for all of us to make our choice correctly.”

Dr. Farooq said that the state is facing immense onslaught from all sides. “Today forces as are inimical to our special status and identity are also trying to distort our history. The other day I visited the musical fountain laser show organized on the waters of Dal, the first part of the show was interesting; however the portrayal of history was erroneous and incorrect. The facts were distorted; the portrayal of the Mughal rule, the Pathan rule and the Dogra rule was divorced from facts,” he said.

“The fact remains, which is even borne out by recorded history of ours that these three successive autocratic rulers were despotic and cruel. This is what our state is facing, it is not just our special status, our history too is being distorted and fiddled with. Raja Lalityaditya Muktapida, and Sultan Zain Ul Abideen Budshah were the only sons of soil who brought laurels to our land and were known for their people friendly rule,” he said adding, “I remember my father breaking into tears while reading Kashmir history. We were treated like a chattel. Nonetheless a dying martyr, who was taking his last breath in the lap of Sher-e-Kashmir in 1931, made testament to him that he should now carry forward the mission of freeing people of Kashmir from poverty, misrule, autocracy and tyranny,” he said.

Party president said our miseries knew no limits in the despotic rule. “Our rights were being denied to us, we were not against Maharaja, we just wanted to have a say in government formation, a choice to be the master of our destiny through universal adult franchise but the same were denied to us,” he said.

Dr Farooq while flaying the glove-puppet regimes of Bakshi, Sadiq in destroying the special position of the state said, “From time to time we have seen how some people within us sold their conscience in leau of power and chair. The situation is no different today, today we see people coming forth in different hues, holding apples, ink pots and lotuses in their hands. I caution you against them. They are the modern day Bakshi’s and Sadiq’s. These people can go to any extent to grind their own axe. However, whosoever has ditched the people of Kashmir have met with a disastrous consequence, all these cronies and henchmen will eventually fade on their own into oblivion.”

In a stinging attack on PM Modi, he said, “A failed PM of a failed government, he is! He has failed on every conceivable matrix. Not to talk of his promises which he made while canvassing for 2014 elections, he has put into abyss what good was achieved by the previous government. Every single sector of our country is in shambles. People are asking where the jobs are, where is the black money, where are 2 crore jobs? Today our mothers and sisters are finding it difficult to run their households. Every edibles including cooking gas has become dearer. Who is responsible for this? Why is he shying away from answering as to what he was able to achieve during his stint in power? The other day former minister and senior congress man Kapil Sibal revealed the currency racket of Rs. 3 lakh Cr involving BJP. Not just that people are seeking answers from him on Rafael deal.”

“In order to hide his misrule, PM Modi flared up the tensions with Pakistan. I earnestly insist for a thorough inquiry into the incident that devoured over 40 CRPF men on Jammu –Srinagar highway. Unfortunately, PM Modi is milking the post Pulwama situation and Balakote to extreme levels to hide his misrule and mis-government. However, he cannot befool the intelligent masses of the country with his sophistry and gimmickry now. He stands no chance, they have been unmasked now,” he said.

Party president said PM Modi is behaving like Hitler. “Like him he promised the country everything under sky, however when it came to delivering on those promises, he could not make any difference on the ground. On the contrary he aggravated the situation to an extent which will take years to restore.”