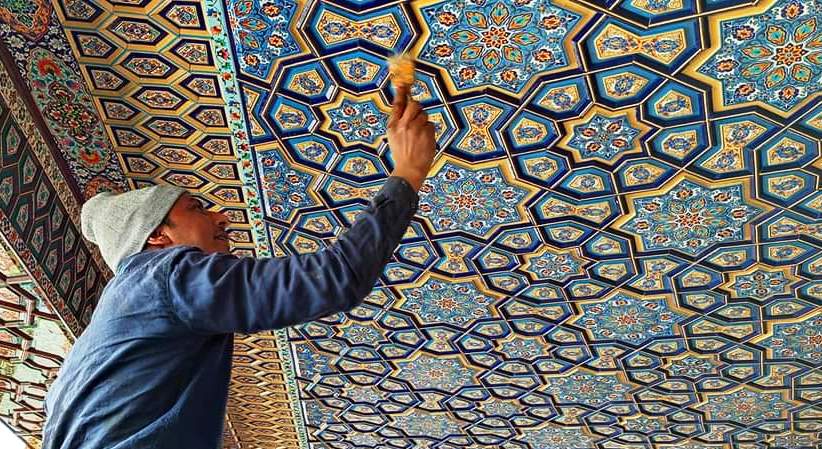 Srinagar: Inspired by the turquoise hues of Iranian shrines, Kashmir valley’s  500-year-old  Imam-bargah located in the Zadibal area of the summer capital is presently getting a makeover.

A 25-member team is engaged in intricate papier-mache on ‘khatamband’ work at the Imam-bargah where the Shia Muslim community of Kashmir congregates for ‘Marsiya Khwani’ and other religious occasions.

Master-craftsman Iqbal Hussain Khan, who has conceptualized the whole idea of papier-mache patterns, said the designs used were copyrighted.

“The new paisley has got the turquoise influence of the Iranian shrines. These designs are copyrighted but unfortunately, you will find people copying designs randomly. Our 25-member team is busy day and night to complete the work which had been delayed due to the Covid pandemic earlier,” he said.

Iliyas Rizvi, an oral historian, and a craft researcher said the turquoise influence had been adapted from Masjid-e-Jamkaran situated in Qum, Iran.

“This is the oldest Imam-bargah of Kashmir and is also counted among the oldest in the entire subcontinent. It was built in 1518 and now Imam-bargah, Zadibal is a masterpiece in the making as the new reconstruction involves a lot of art and craftsmanship. The work involves woodwork khatamband and a fusion of papier-mache on khatamband. The color palette has been influenced by Persian architecture. The turquoise influence has been adapted from Masjid e Jamkaran situated in Qum, Iran,” he said.

He said the papier-mache on khatamband fusion was spread over 10,000 square feet.

“The khatamband and papier-mache designs are spread over 10,000 sq feet. The dome will itself be unique in design. The 14-inch ‘sitare’ (star) in khatamband is the first largest one being experimented on in the building. The installation of new ‘zariya’ in 2018 is itself a masterpiece, which we see as an addition to the architecture at the Imam-bargah,” he said.

Rizvi said the Imam-bargah had a special significance for the Shia Muslims.

“Imam-bargah, generally speaking, is a specially designed architectural building site of religious significance where the Shia Muslim community congregates on special Muslim calendar dates and is also exclusively used for Marsiya Khwani. Once completed, this Imam-bargah can even boost heritage and pilgrimage tourism in the Kashmir valley,” he said.