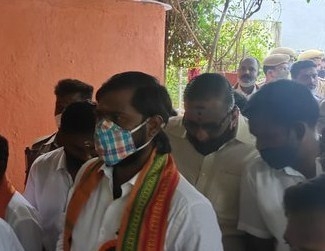 A notorious gangster on Monday tried to join the Bharatiya Janata Party’s Tamil Nadu unit at an event in Chennai’s Vandalur area, but fled after seeing the police, The Hindu reported. Surya, facing over 50 criminal cases, was going to join the saffron party in the presence of state chief L Murugan.

The Chengalpattu district police received a tip-off that Surya will be attending the event and went to the spot. However, the gangster escaped in a car after noticing them. The police arrested six others with knives and an investigation is underway to confirm if they are related to Surya.

BJP Tamil Nadu General Secretary KT Raghavan told the newspaper that they staged a protest outside the police station as two party members were also arrested with the six accused. “Those two are our party members,” he said. “We did not seek the release of the six.”

When questioned about a gangster joining their party, Raghavan said it was difficult to vet everybody’s credentials as hundreds of people were joining the BJP on a regular basis. “None of these persons have joined separately,” he added. “When there is an influx of members, one or two cases end up like this. We are being cautious about this.”

Karti Chidambaram, an MP from Sivaganga in Tamil Nadu, asked if the BJP would care to comment about a gangster attempting to join their party. The police said several cases, including murder, attempt to murder and use of explosives, were filed against Surya.

Gangsters Kalvettu Ravi, involved in more than 36 cases, including six murders, and another individual identified as Sathyaraj also joined the BJP.