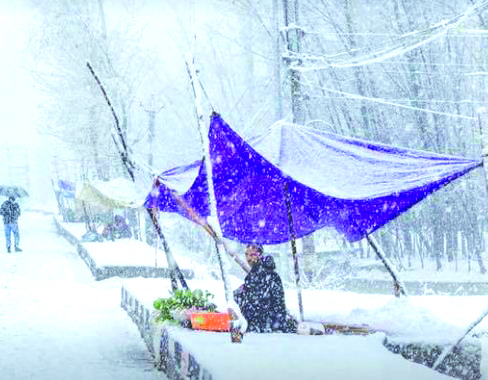 Srinagar, Feb 12: With few inches of snowfall in the valley, authorities on Monday suspended power supply to many areas in Kashmir Valley.

Soon after Kashmir received fresh snowfall, electricity supply to the many rural and urban areas was snapped.

“The electricity was snapped on Sunday evening till 12am Monday. Even now the electricity is playing hide and seek,” said Tariq Ahmad, a resident of Magarmal Bagh.

Same is the condition in Old Srinagar, where most of the consumers are unmetered.

“Since Sunday, the electricity couldn’t last for an hour at a stretch; it was snapped after every 10 minutes. People suffered in many ways,” Saima, a student from Ranawari, said.

“The weather predictions appear in media days earlier, but every time our government departments fail to respond to it,” Mujeeb Ahmad, a resident of Qamarwari, said.

The situation became even worse in rural areas, where many villages have been snapped electricity for more than 20 hours now.

As per the reports, many villages in Baramulla district have been without electricity since Sunday evening.

“The entire Patan area, which comprises of more than 15 villages, is without electricity since Sunday. Even as the snowfall was not heavy enough to damage the transmission lines, the department is habitual of snapping the electricity on these occasions,” said Irshad Ahmad, a resident of Patan.

The south Kashmir villages had similar woes to express, with many saying that the department had failed to provide proper electricity this winter.

Reports of power cuts were received from Dilagam, Krangsoo, and Ratnipora villages in Anantnag district.

Chief Engineer PDD, Shahnaz Goni, told The Kashmir Monitor that the power demand has shot up with the snowfall.

“We have restored 80 per cent electricity in Srinagar. The demand has been 500 watt till morning, which after snowfall grew to 1000watt for Srinagar. Further the restoration work in going at the district level,” she said.

She said that transmission lines and transformers have suffered developed short circuits due to the snowfall.