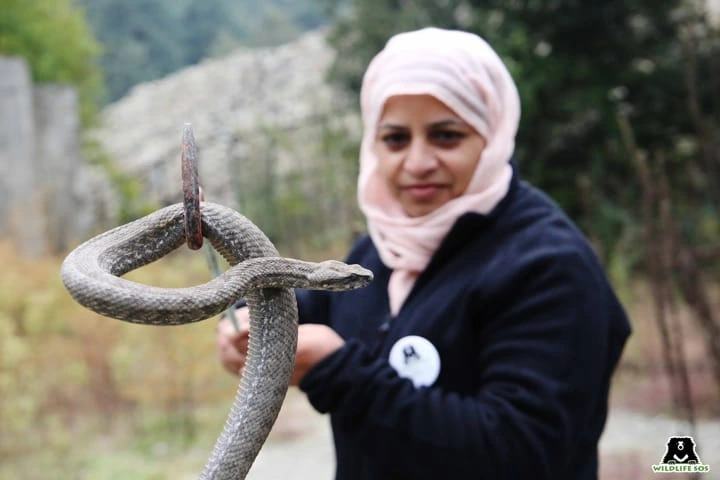 Srinagar: Wildlife SOS has reported a ‘considerable increase’ in the sightings of rare snakes in the Valley.

The reptiles were usually considered ‘not native to’ Jammu and Kashmir.

While Kashmir mostly has witnessed sightings of Levantine vipers, species like the ‘elusive’ Eastern Cliff Racer and Common Sand Boa too have been reported.

Wildlife SOS, which is counted among the largest of its kind organization in South Asia, has urged the people to ‘rely only on professional expertise’ even as the sightings of snakes have caused a lot of panic among the locals in Kashmir these days.

“A Rare Snake Makes an Appearance! Not one, not two… but three Levantine vipers were extricated by the team at Jammu and Kashmir in the span of one day! This snake is highly venomous; its venom can cause necrosis (death of body tissue) and affect hemostasis (the body’s ability to stop bleeding after injury),” stated a recent Wildlife SOS report on its rescue operations from January to June, 2022.

Another report of the Wildlife SOS states that the ‘elusive’ Eastern Cliff Racer and the ‘not native to J&K’ Common Sand Boa too were rescued amid a considerable rise of sightings of rare snakes.

“A total of 19 snakes were rescued this April, as opposed to just one in April 2021. The month of May also saw a considerable rise in snake sightings with a total of 24 snake rescues which kept our rescue team busy. A nearly six-foot-long Himalayan Trinket Snake got injured in a conflict situation in the Zabarwan Forest Range area of Jammu and Kashmir when the reptile was spotted by the locals. Another species which our rescue team has encountered is the Eastern Cliff Racer, an elusive reptile not commonly seen in Jammu and Kashmir. In some rare cases, the rescue team also comes across a few snake species which are not native to Jammu and Kashmir,” the report stated.

It further said an Indian Rat Snake was rescued from the swimming pool of a hotel besides the rescue of a juvenile Common Sand Boa, which is not found here. “It (Common Sand Boa) was suspected to have boarded a transport or goods carrier truck coming from another state,” the report added.

The Wildlife SOS especially warned against the most common Levantine viper, which is a poisonous snake and can make ‘lightning-fast strikes when provoked’.

“The venom of this snake is not included in the polyvalent anti-venom that is used to treat the bites by the Big Four in India, making this viper’s rescue highly dangerous! Hence, for each case, the team was extremely vigilant while dealing with this reptile. The Wildlife SOS unit in Jammu and Kashmir also makes an attempt to create awareness about this snake in the region, so that the people rely only on professional expertise to deal with them,” it said.

Wildlife SOS Jammu and Kashmir Programme Head Aaliya Mir, who incidentally was in news yet again on Wednesday after she rescued a Levantine Viper at Wuyan Pampore, blamed climate change and urbanisation for the increase in sightings.

“When we started rescue operations in 2007, there were not so many snakes’ sightings. However, from 2104, there has been an increase probably due to climate change and urbanisation. We must have rescued over a 100 snakes, both venomous and non-venomous,” she said.

She said people should seek professional help immediately in case of snake sightings.

“Whenever we get a call, we give instructions (about dos and don’ts) before our rescue team arrives. I ask them where the snake is and about the position it is in. I also ask for a photograph if possible. As far as this incident (yesterday at Wuyan) is concerned, I received a photograph and I could see that it is a venomous snake. Therefore, I told them to be very careful and stay away till our team comes,” she said.