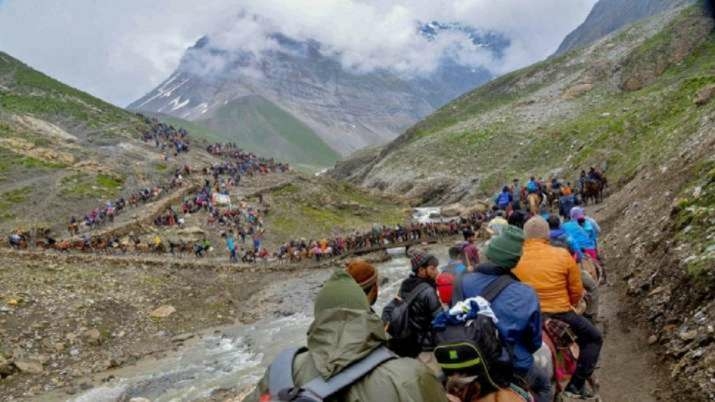 Srinagar: It is almost mid-July and 52-year-old ponnywala Tariq Ahmad Bhat is awaiting customers in picturesque Pahalgam. For the last one week, he could get only eight customers given the fewer arrivals due to the second Covid wave.

July had never been distressful for Bhat. It used to be a peak season for ponywallas as they were ferrying pilgrims from Panchtarni to Amarnath Cave.  Fearing re-emergence of COVID-19, the administration suspended Amaranth Yatra for the second time.

The 56-day yatra to the 3,880-metre-high cave located in the upper reaches of the Himalayas takes place through twin routes of Pahalgam and Baltal. These two months used to be a lucrative period for hundreds of ponywallas who would ferry pilgrims up to the holy cave.

“We would earn a good sum to manage our daily livelihood for months together. The last two years have been distressful for us. Working days have been limited, which has affected our earnings,” he said.

Bhat said that most of the ponywallas are now camping at Pahalgam to ferry visitors at very low rates.

“We would charge Rs 5000  for ferrying pilgrims during the yatra. Now our income has reduced to mere Rs 300 to 500 per day which is a big loss for us,” he said.

A section of these ponywallas is working as labourers in their home districts to earn a livelihood.

The scenes are no different at Sonamarg, which used to be abuzz with pilgrims during July. Ponywallas, cab drivers, dandiwallas, palkiwallas, and other service providers have been hit hard.

Few ponywallas have visited Sonmarg to earn their living this season.

Ghulam Mohammad, a 60-year-old ponywalla from Kangan in Ganderbal district said only 30 percent of ponywallas are currently staying in Sonmarg to ferry visitors to the nearby Thajwas glacier at meager rates.

“This was the time when hundreds of ponywallas would arrive at Sonmarg to ferry tourists up to the cave. We would earn good money in these two months,” he said.

Jammu and Kashmir administration has made arrangements for virtual morning and evening ‘aartis’ at the Himalayan cave shrine this year.

Ponywallas and other service providers hope that the administration will come to their rescue. “The government should help us to overcome this crisis. We have been suffering for a long time and our financial position has weakened,” Mohammad said.

In May, Jammu and Kashmir government announced a financial package to help the people in distress. Under the package, Rs 1,000 will be paid to all the registered construction workers, palkiwalas, pithuwalas, and ponywalas for the next two months.