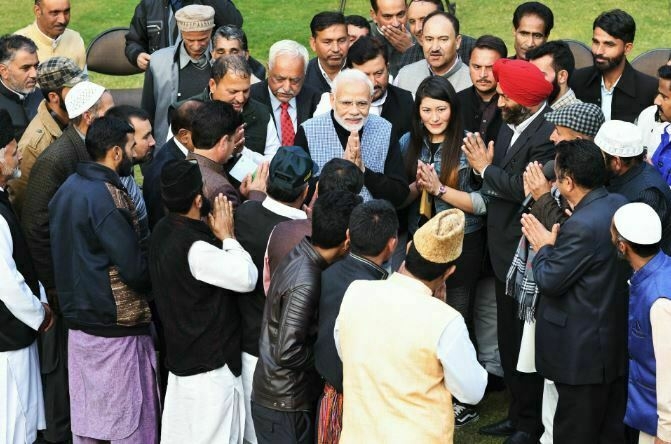 New Delhi, Dec 19: A delegation of 48 newly-elected sarpanches of panchayats from Jammu and Kashmir called on Prime Minister Narendra Modi on Wednesday and sought his assistance for the development of the state.

Led by chairman Shafiq Mir of All Jammu and Kashmir Panchayat Conference (AJKPC), an apex body of panchayat leaders of the state, the delegation thanked Prime Minister Modi and conveyed its appreciation to him for empowering the institutions of local self-governance through the successful and peaceful conduct of panchayat elections in the state.

Modi conveyed his best wishes to the newly-elected representatives and exhorted them to strive for the welfare and upliftment of people.

He said the government is committed to the empowerment of the people, and will stand shoulder to shoulder with the local government representatives for the welfare of the state, to fulfil the aspirations of the masses.

Modi assured them of the government’s full support for making the Panchayati Raj model a success, and responsive to the people’s basic necessities and grievances.“Empowerment of grassroots institutions is a significant step in taking Jammu and Kashmir away from the path of violence and secure the rights and development of the local populace, he said.

AJKPC chairman Mir said the people overwhelmingly participated in the elections which shows their strong belief in democracy.The state recorded an overall polling of 74 per cent in the nine phases of panchayat polls, according to election officials.

The polls passed off peacefully amid tight security with no untoward incident despite a boycott call given by separatists and the lurking threat of violence by militants.

Major regional parties, the National Conference (NC) and the Peoples Democratic Party (PDP), did not participate in the polls.
Mir said that despite the PDP and the NC boycotting the elections, “an impressive 74 per cent voting was registered in the state which shows that the people have faith in democracy”.

Terming the peaceful and successful panchayat elections in the state as a victory of democracy, he said that they will not allow leaders to play politics on panchayats, saying that these are community institutions and not a political battleground.

He expressed gratitude to the people for taking part in the elections in a large number despite all odds.

“The politicians of the state should now understand one fact that people do not believe in their dirty politics. They want peace to return to the Valley,” he said.

“I urge people in the country not to see Kashmir from any isolated incident of violence or stone throwing. The people believe in peace and tranquillity,” he said.

Expressing sorrow over the killing of seven civilians in Pulwama recently, Mir said it was a very unfortunate incident which should not have happened.

He also urged people in the state not to visit an encounter site.”The majority of the people in the Valley want peaceful and dignified life. Some vested interests have exploited youngsters and are playing with their lives as well as future,” Mir said.

Seven civilians died last week when security forces opened fire at an unruly mob that thronged the site of an encounter in south Kashmir’s Pulwama district in which three terrorists and an army man were killed.

Mir asked political parties in the state not to link the elections with any kind of political ideology and said that a panchayat is just a community institution and local governance body “which has nothing to do with politics”.