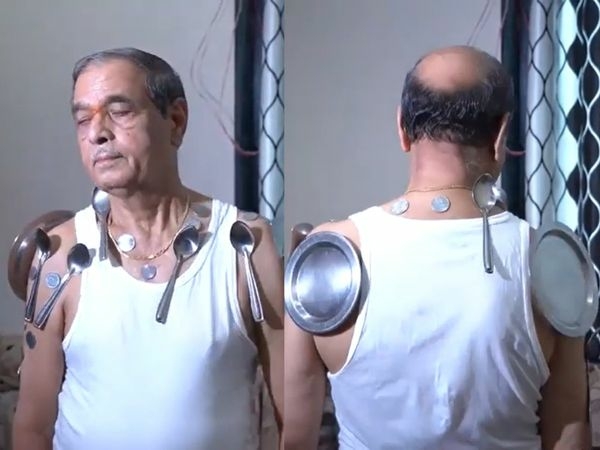 People have talked about having side effects such as fever and body ache after getting their vaccine doses, a man from Nashik in Maharashtra has made a bizarre claim. Arvind Sonar, an elderly citizen of Nashik’s Shivaji Chowk, has claimed that he has developed magnetic powers after taking the second dose of the Covid vaccine.

Sonar has claimed that metal objects are easily getting stuck on his body after taking the vaccine doses. Sonar also made a video to prove his bizarre claim. In the video, plates, spoons and coins can be seen sticking to his body.

When the items stuck on his body for the first time, the family members thought that it could be due to sweat. However, when he tried sticking objects after taking a bath, they still stuck to his body.

Sonar’s son Jayant said that he had seen a similar video of a person from Delhi who claimed to have got magnetic powers after taking the second dose of Covid vaccine. He then asked his parents o try it too.

“When we placed spoon, plates, coins on the body, they stuck to his body,” he said.