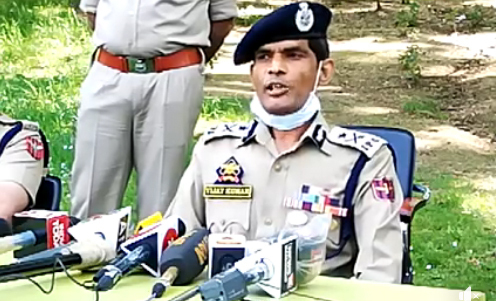 He said that the killing will help “contain militancy in the Valley to a large extent.”

Addressing press conference here, the IGP said that Naikoo was very influential militant commander, who would release videos almost every month to lure youth towards militancy and to pass directions to his cadre “to execute civilian and police killings.”

“I will not hesitate in saying that Naikoo was a very influential militant commander. His killing is a big success for us and major jolt for Hizb militancy in Kashmir. Naikoo killing will help contain overall militancy in Valley,” Kumar said.

Kumar said that Naikoo was “on radar for the past six months.”

“The day before yesterday we tracked his movement and final got him at Beighpora Awantipora along with his aide,” he said.

Asked whether militant leadership of Hizb was wiped out, the IGP said there will be some other leader, and “we will go after him too”.

Asked about new militant group ‘The Resistance Front (TRF)’, the IGP said TRF “not a new outfit but a shadow of Lashkar.”

“Post August 5 last year, there was international pressure on Pakistan to stop militancy, so Lashkar floated The Resistance Front (TRF),” he said.

While replying to a query about communication blockade in Kashmir, the IGP said said that it was “necessary to prevent rumour mongering and to maintain in Law and order”.

“We will review the situation and restore services soon,” he said.

The IGP Kashmir also said that this year so for 64 militants have been killed in 27 encounters while as 125 persons dubbed as OGWS have been arrested.

‘Switched off’, ‘out of coverage area’: Stranded Kashmiris suffer as officials go incommunicado