Modi doing everything to come back to power: Mir 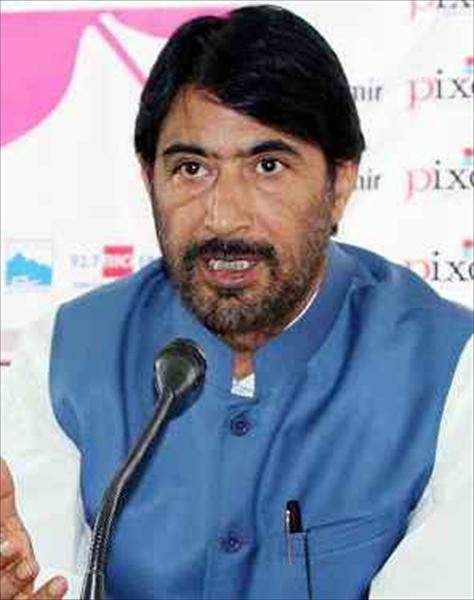 Srinagar, Apr 14: Leading a mega road in Dooru are of South Kashmir today, the J&K Pradesh Congress Committee (JKPCC) and Party Candidate from Ananatnag Lok Sabha Constituency G.A. Mir has said that Narinder Modi is doing every to come back to power, but he will not succeed to mislead the masses again and will taste the defeat in the ensuing Parliamentary elections.
G.A. Mir also said that Congress Party was capable enough to defeat the false propaganda, lies and deceit on the part of PDP BJP aiming to gains electoral gains.
The road show which started form Khanbal passed through Lissar, Bemdoor, Bragam, Dooru, Zamalgam, Kote, Dodhwagan, Qamar, Nowgam, Saidiwara, Changoo and Ujar in Dooru Assembly Constituency which was joined by hundreds of people.
while leading a road show G. A. Mir addressed people at various places and emphasized them to ensure his victory with a thumping majority, as that, this election would decide the future of the country and the state of Jammu and Kashmir, reiterating his appeal to people especially youth to vote for congress party keeping inview the five years rule of Narinder Modi, three and half years of rule unholy alliance of PDP & BJP in the State.
You need to differentiate between the performance of BJP & Congress, Mir told the people, but at the same, he felt confident that people on the basis of performance will vote for Congress Party, for the fact, BJP Govt led by outgoing Prime Minister Narinder Modi has not been able to ensure safety and security of the people, besides the development of the State started by successive UPA regimes have either been stopped or diverted on one pretext or the other.
The developmental scenario of the State has come to standstill due to biased attitude of Prime Minister Narinder Modi, G.A. Mir said, the unholy alliance between PDP BJP has vitiated the atmosphere in the valley, besides badly affecting the developmental scenario of the State. The so-called developmental schemes and policies framed for the developmental of State have been flawed, the tall claims and announcements made by the Centre and previous Coalition govt in the State has proved mere a lip service, G.A Mir said.
He said outgoing Prime Minister Narinder Modi remained hell bent upon to change the narrative, renaming institutions, areas, roads, official buildings during five years rule Narinder made deliberate attempts to change the history of the country, besides taking control of vital institutions inorder to silence the opponents, but people of the country will respond to this rhetoric on the part of Narinder Modi and will respond to BJP RSS by defeating in ensuing Lok Sabha Elections
He said outgoing Prime Minister will not succeed in luring the voters against, as that, people have realized that Narinder Modi and his team has just serve them through lips, nothing concrete is visible on the ground.
He said soon after becoming the Prime Minister Narinder Modi changed the Currency (demonetization) by not even caring about the people especially the poor and down trodden, who were not even able to understand as to what next, they would do. Business Community and small entrepreneurs suffered immensely due to this step taken by Narinder Modi and I want to tell what was it (Demonetization) it was an organized loot on the Party of BJP Govt due to which the country’s economy suffered immensely, Mir told the people.
Hitting out at PDP BJP for failing people on all counts, as a result, people have lost faith in the democratic process, first PDP claimed to stop RSS from entering Kashmir valley, then after getting 28 seas, Party embraced BJP, which has disappointed people of Kashmir valley, G.A. Mir said and reiterated his appeal to people to ensure Congress Party victory with a thumping majority.
Among others who participated in the road show included Bashir Ahmad Magrey, Gulam Mohi U Din Bhat, Block Presidents, PCC & DCC Members, Youth Leaders and other prominent party workers.