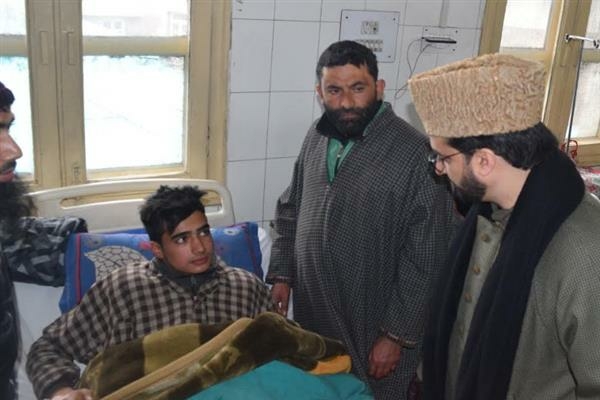 Srinagar, Feb 14: Hurriyat (M) chairman Mirwaiz Umar Farooq today visited the SMHS hospital to inquire about the health of dozens of students who were injured in an explosion inside a school in South Kashmir’s Pulwama district on Wednesday. Mirwaiz met the injured students and inquired about the treatment being provided to them besides praying to Almighty for their speedy inquiry.

Mirwaiz said that not only students but Kashmiri businessmen and traders stationed in various places in India are also targeted and harassed forcing many to flee. He said no action is ever taken against these anti-Kashmir elements.

Mirwaiz said that the vicious propaganda against Kashmiri’s projected by certain sections of Indian electronic media and the distorted image of Kashmir and the discourse around its dispute has made the lives of Kashmiri staying in various Indian states all the more vulnerable to attacks by goons.

Mirwaiz said that it was the utmost responsibility of the heads of various Indian states where Kashmiri students businessmen are stationed to ensure their safety and security. Meanwhile, on the directions of APHC chairman Mirwaiz Umar Farooq, a delegation led by Sufi Mushtaq Ahmed visited the Bone and Joints hospital Barzulla to inquire about the students who were injured in the Pulwama explosion. The delegation prayed for the speedy recovery of injured.