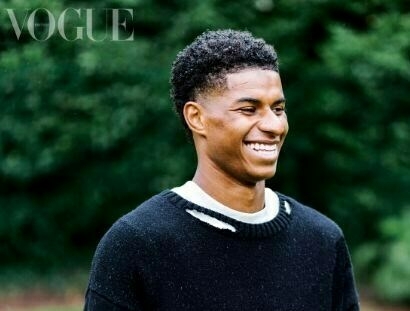 Marcus Rashford has been recognised for his brilliant work away from the pitch (Credit: Misan Harriman)

The Manchester United star’s campaign for free school meals led to a dramatic U-turn by the Government.

Rashford convinced the Government to provide £15 a week meal vouchers for poor children in the UK during the summer holidays.

As a result of his hard work off the pitch, Rashford has been picked to feature on the cover on the iconic magazine.

He will be pictured on the front cover alongside mental health campaigner and model Adwoa Aboah.

The inspirational pair were photographed by Misan Harriman with a predominantly black team on set.

Misan is the first black male photographer to shoot any cover of Vogue in its 104-year history.

Speaking to Vogue, Rashford has revealed the reasons behind his charitable work.

He said: “I’m by no means a politician but I had a voice and a platform that could be used to at least ask the questions.

“If I didn’t put myself out there and say, ‘This is not OK and it needs to change,’ I would have failed my 10-year-old self.”

Before he added: “As an athlete, failure is part of everyday life.

“You lose a game, you bounce back for the next one.

“You lose in a cup final, you come back stronger next season.”

The 22-year-old has just fired the Red Devils to the Champions League with 17 Premier League goals.

But instead of jetting off on a luxury holiday to recharge his batteries, he is still helping the hungry.