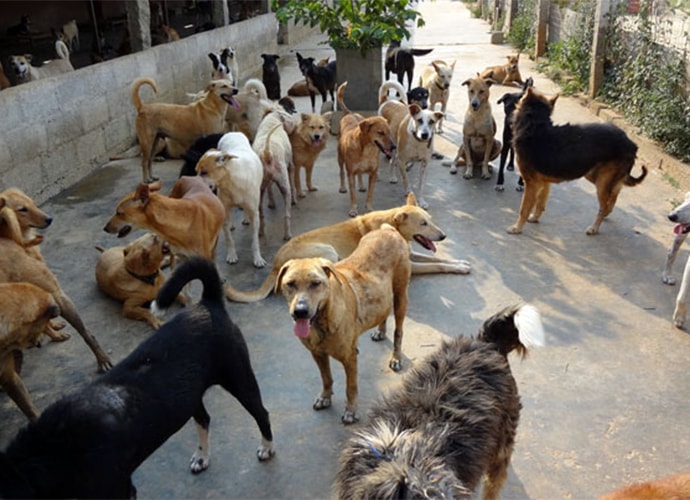 Veterinarians said the strays are suffering from highly contagious `mange’. Mange is a highly contagious infection caused by tiny external parasites. It can lead to severe irritation of the skin which can significantly affect dogs. Most of the stray dogs have become itchy in Srinagar creating panic among people. Some dogs have developed lesions on the skin and some have shed their hair.

“The problem is huge. Unfortunately, we are not able to do much for their relief. We work a lot but the challenge is much larger,” said Dawood Mirani of Animal Rescue Kashmir, an NGO based in Srinagar.

According to a dog census conducted by Srinagar Municipal Corporation (SMC), there were 49000 dogs in Srinagar city in 2012-13. Around one lakh poultry birds are slaughtered every day which generates 40,000 kilos of waste that caters to the food need of the stray dogs. As per WHO estimates, India is endemic to rabies accounting for 36 percent of the world’s deaths.

What has sent the shivers are the rumors that the infection might transmit to humans. People in several localities are hanging plastic bottles with colored water on their gates and walls to keep stray dogs away.

“Most of the dogs in our localities have lesions on their skin. Some are seen scratching in lanes and by lanes. Some are oozing blood. We fear that our kids might get infected,” said Nadeem Ahmad, a resident of the civil lines area.

However, experts said that the chances of transmitting this disease to humans are zero. “Most dogs suffer from this problem. It is communicable from dog to dog. If left unattended it can be deadly for the animal. It does exist in other animals like cats, but it is mostly found in dogs. It is easily treatable. There is a medicine called `Ivermectin’ which can be administered to dogs and they will be fully cured,” said Mirani.

Director, Animal Husbandry, Kashmir, Dr. Purnima Mittal said they have not come across any such report so far. “I don’t have any info about stray dogs. So far, we have not received any case. Plus, SMC deals with stray dogs. However, we can help them in treating the disease,” she said.