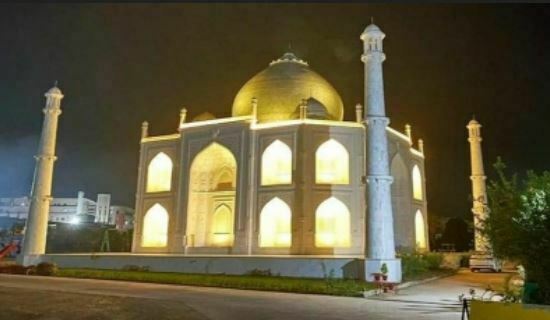 An intricate replica of the historical Taj Mahal built in Madhya Pradesh’s Burhanpur district has become a big hit among the people, especially the local artists, YouTubers and couples.

Locals and people from surrounding districts visit not only to see the imitation of the monument of love but also for pre-wedding shoots.

Spread on a 90 square metres area, it is a residential building with four bedrooms. One-third of the structure has been built in the line of the Taj Mahal. Though the replica is a gift for a wife as an expression of love, it was also built to add historical value to Burhanpur.

Anand Prakash Chouksey, who has constructed the building for his wife Manjusha Choukey, said: “People always wondered why the Taj Mahal was not built in Burhanpur as Shah Jahana’s wife Mumtaz had died in the city. Also, people randomly ask what Burhanpur is famous for and being a teacher I decided to give a historical value to my district. This is the reason I decided to build my home as a replica of Taj Mahal in the name of my wife.”

This building is not just a replica of Taj Mahal, but more interestingly it has some other connections with Agra. White Marble tiles used for its beautification are from Agra. More interestingly, carving (nakkashee) and its design have been done by people belonging to Agra. One of the two engineers who designed the entire structure is a Muslim a” Mustak Ali, said Chouksey.

Chouksey said he got inspired during his visit to the Taj Mahal. He, then studied its architecture closely and asked the engineers to take note of the structural details. The basic structure occupies 60 square metres. The dome is 29 feet high and consists of two bedrooms on two floors. The house also has a kitchen, a library and meditation room.

He said he wanted a house 80 feet high but could not get permission for it. Following the rejection, he decided to build a Taj Mahal-like structure. Chouksey’s unique house was built over a period of three years.

Not only this, the lighting both inside and outside the house makes the structure shine in the dark just like the real Taj Mahal. Chouksey believes that his house will be a spectacle no tourist can afford to miss while visiting Burhanpur.

“Generally, people see the Taj Mahal as a tomb, but we can think beyond. It is a symbol of love, which teaches us to be united. I think, in the coming days, more people will build the same replica as an expression of love for their partners. And above all, I am happy that I could give prominence to my home town,” Chouksey said.