LG meets all DCs of Kashmir division; asks them to ensure COVID-19 behaviour in respective districts 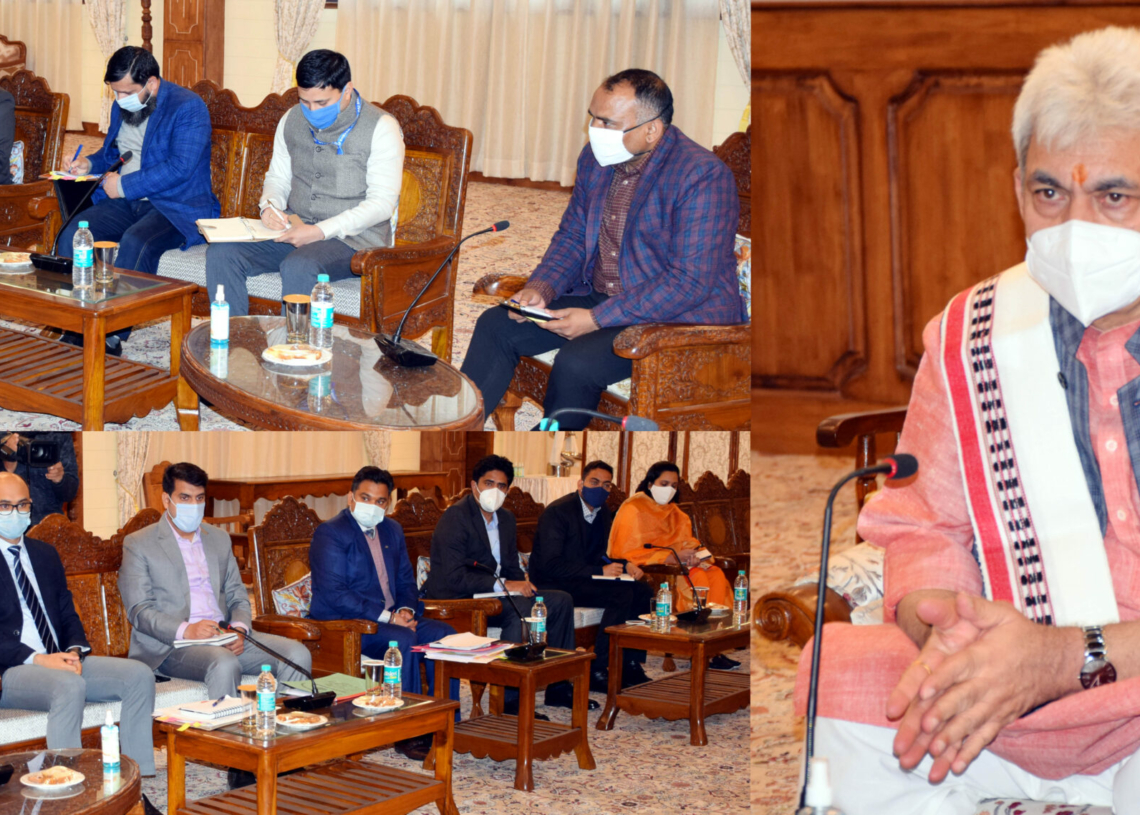 SRINAGAR:   In order to receive a first-hand appraisal of the Administration’s response towards addressing the issues of public, besides ensuring transparency & accountability in the governance system, Lieutenant Governor, Manoj Sinha today chaired a meeting of all Deputy Commissioners of Kashmir Division here at Raj Bhavan.

The Lt Governor observed that officers are the face of administration and exhorted them to discharge their duties with utmost sensitivity and responsibility, and put in best efforts to mitigate the problems of the people.

He directed them to hold grievance redressal interaction with people at least three days a week in their respective offices to redress genuine grievances at the earliest.

In view of the upcoming holy month of Ramzan and Navratri festival, the Lt Governor directed the DCs to ensure all basic facilities to the people in their respective districts.

He asked the officers to make sure that uninterrupted power and water supply is made available particularly during Sehri and Iftaar so that people do not face any difficulty during the holy month of Ramzan.

While underscoring the importance of Block Diwas, the Lt Governor said that it is an important administrative intervention and called upon the officers to use this platform optimally for public service delivery and redressing grievances of the people.

He also instructed the visiting officers to chalk out rational plans for Block Diwas programs in their respective districts, and audit the grievances received and settled.

In wake of the upcoming Shri Amarnath Ji Yatra, the Lt Governor directed the Deputy Commissioners to ensure fully functional toilet facility at designated places in the districts through which the Yatra passes, within the set time frame. He called for synergizing the inter-departmental efforts to provide the adequate facilities to the visiting Yatris.

The Lt Governor, while reviewing the activities under “Azaadi ka Amrut Mahotsav’, asked the DCs to identify people from their districts who have played an important role in the Indian freedom struggle & in safeguarding the territorial integrity of J&K, and felicitate them in the ongoing celebrations. He also directed the officers to ensure the hoisting of the National flag on all government buildings and establishments under their jurisdiction following proper protocols and laid down procedures.

Underlining the significance of e-Governance, the Lt Governor directed for updating websites of all government departments dynamically with all important information including beneficiary lists and details of welfare schemes for people in the most user-friendly way. The Lt Governor also instructed the district officers to make tangible efforts towards implementation of e-Office system at the district level.

The Lt Governor directed the officers to put the list of works identified under the Back to Village program, and those which have been completed, at vital public places across all the Panchayats for the information of people.

The Lt Governor further directed for laying specific thrust on the development of playfields in Panchayats, implementation of Forest Rights Act, developmental needs of border villages, implementation of Jal Jeevan Mission, and removing illegal encroachments from the state land. He also directed for discouraging the practice of poppy and bhang cultivations by replacing such practices with cash crop cultivation.

He further laid stress on working out the best district plans and incorporate all important developmental proposals well in advance.

The Lt Governor passed specific directions for tapping the tourism potential of uncovered areas for the socio-economic upliftment of the local population.

Earlier, all the DCs put forth their suggestions before the Lt Governor for making public delivery system and redressal system more efficient.