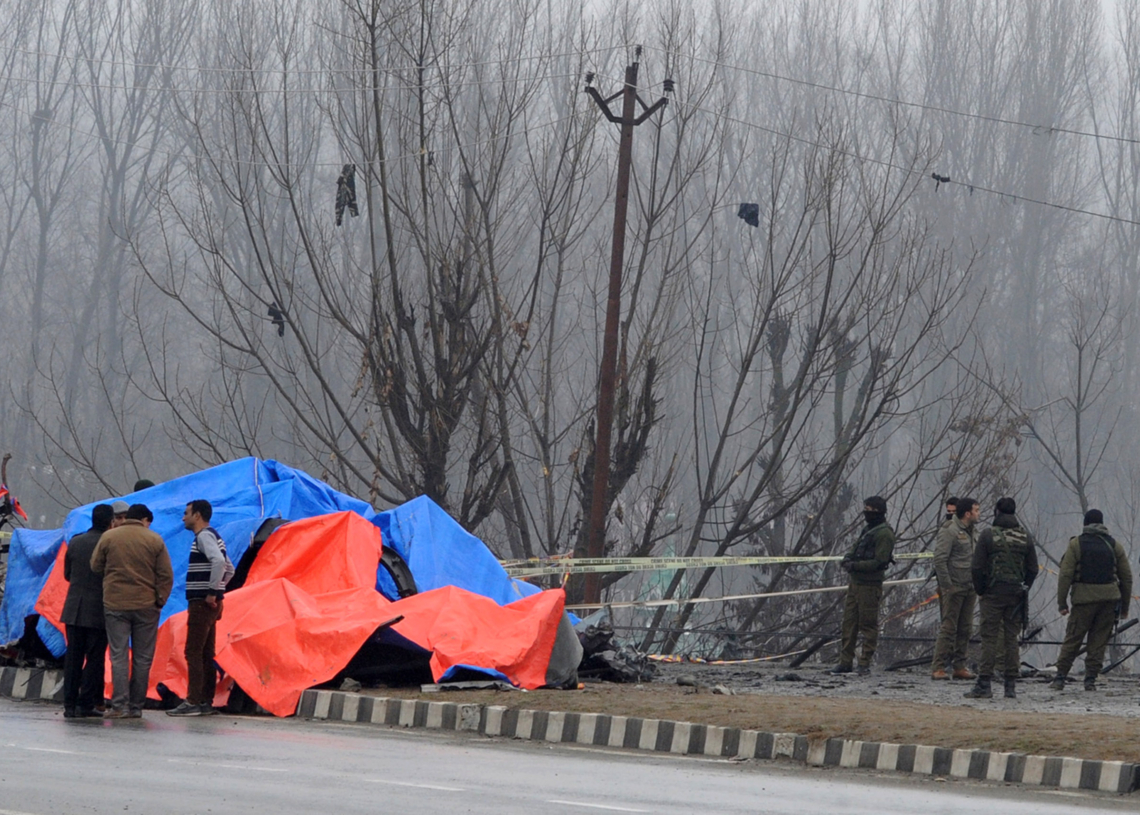 Srinagar, Feb 15: On a wintry February 14 afternoon, a CRPF convoy moving on Srinagar-Jammu Highway reached Awantipora town in southern Kashmir, a suicide (Fidayeen) car bomber blew up himself by ramming into the two CRPF buses leaving around 49 dead and dozens others injured critically.
Soon after the incident militant outfit Jaish-e-Mohammad claimed the responsibility and identified the car bomber a local youth of Pulwama, who had joined the outfit last year.
Like earlier attacks on forces, this brutal attack has left the security establishment shocked and guessing. The J&K governor admitted the mistake and termed it a major “security lapse and intelligence failure”.
“We are working out on the things about the loopholes that took a massive toll on forces. Where did we fail in protecting forces while they travel in convoys on the highway?” said a top officer in J&K police dealing with security wing.
Militants carry out their assaults despite deployment of CRPF, police and Army on the connecting points on the highway.
However, the attack on the government forces on Srinagar-Jammu highway is not the first, but this one is the most deadly in the last three decades ever since armed militancy broke out in Kashmir.
The security agencies and the NIA team investigating the attack have raised some key points as to why the attack yet again took place between Pampore and Awantipora stretch of the highway.
Two years ago, in June, militants daringly stopped CRPF bus on the same highway in the Pampore town, few miles away from this blast site, and rained it with bullets from different directions, killing eight CRPF men and injuring 22 others.
Earlier, three militants suddenly appeared on the highway near EDI building, fired on a CRPF bus, wounding 11 personnel and then rushed into the EDI building.
The frequent attacks on the highway are a reminder of deadly attacks on forces carried out by militants in the conflict-torn Kashmir after the insurgency began in 1987.
In 2014, two days before August 15-India’s Independence Day, militants again attacked a police party resulting in killing of two security guards of a police official and a civilian.
In the same year, hours before Prime Minister Narendra Modi’s second visit to J&K, militants ambushed BSF convoy at Kadlabal in Pampore town leaving eight men including assistant commandant seriously injured.
In July 2012, militants attacked Convoy Protection Force Party of army from a close range killing a soldier and injuring another one seriously.
Almost 10 years ago, in Dec 2006, militants attacked a police party in Kadlibal and killed SHO Manzoor Ahmed and injured his two security guards. A civilian was also killed in the attack.
Officials in police and other counterinsurgency said that militants have many reasons to choose this 20 kilometer stretch for their assaults. “One of the reasons is that the Highway along the Pampore town has a number of link roads connecting on it with internal areas. Two, the Highway sneaks along the Jhelum River,” they said.