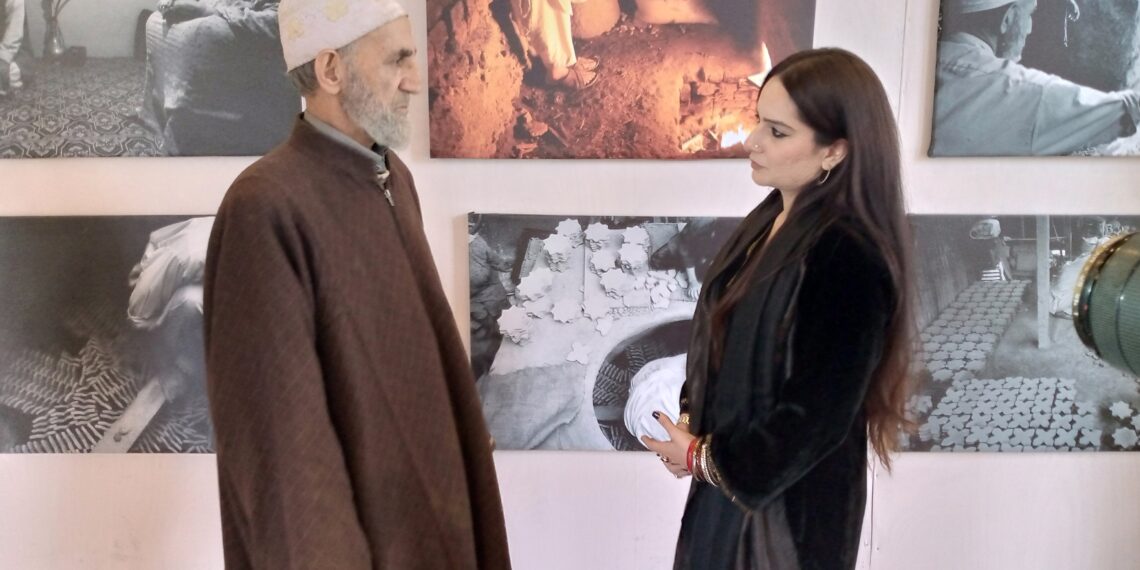 Srinagar: There was a time when constructing houses in the Kashmir valley was considered incomplete without the use of ‘Khanyari’ tiles. While the Khanyari tiles have almost disappeared from the buildings, a master craftsman and an architect have come together to restore the pristine glory of the traditional craft.

As part of efforts to revive the dying art form, an exhibition titled ‘The Last Craftsman’ showcasing the works of master craftsman Ghulam Mohammad Kumar by architect Zoya Khan was held here on Tuesday.

“I have been documenting the works of Haji Sahab (Ghulam Mohammad Kumar) for the past two years. He is the only one who makes these tiles now. He is the last surviving craftsman and his children have moved to other professions. Khanyari tiles used to be an important element in most Kashmiri houses. There was a time when the entire mohalla (in Khanyar) was involved in the craft and they would produce around 3000 tiles in a single day. This is a very important component of our heritage and through this exhibition, we want people to know about the craft. Unfortunately, there is barely any demand and the craft is declining. If we do not revive it now, it will become extinct,” Zoya told The Kashmir Monitor.

The exhibition held with the support of Handicrafts and Handloom at the Arts Emporium showcases the works of Kumar through photographs by Zoya Khan. Works of Kumar and his student Umar too can be seen at the exhibition.

Director of Handicrafts and Handloom, Kashmir, Mahmood Ahmad Shah said the exhibition was held with an aim to revive Khanyari tiles so that people again started using the same during construction.

“Zoya is an architect and she teaches architecture at the Islamic University. She has remained associated with Haji Sahab for the past many years and has documented his works. Through the exhibition, we have tried to tell both sides of the story – that the art form is dying and then efforts are being made towards its revival. We want people should again start using these tiles in houses, hotels, etc,” Shah told The Kashmir Monitor.

He said the Handicrafts Department was making efforts to revive all the dying craft forms. “We got the mandate to revive the endangered and languishing craft forms after the introduction of the Handicraft and Handloom Policy. We need to take the art form to a new direction so that creative people like designers get involved in its revival,” he said.

Ghulam Mohammad Kumar said he was hoping that the government makes more efforts toward the revival of Khanyari tiles.

“This art needs more support from the government and Khanyari tiles need more advertisement so that we are able to restore its former glory,” he said.