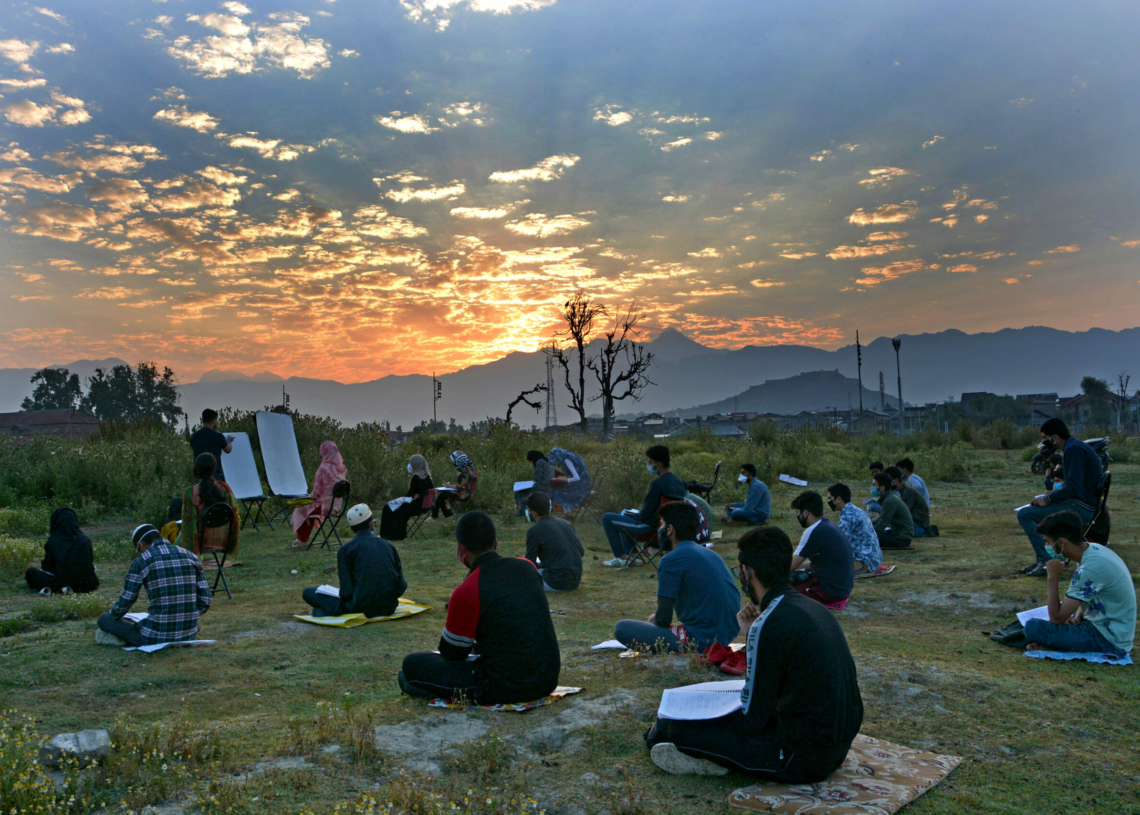 Srinagar: At 5 am every day, 40-year-old Muneer Alam enters Eidgah. He is not a jogger, though for the next 15-odd-minutes he does do a bit of stretching before setting up a few white-boards right in the middle of the huge park in Srinagar that is known for those buried here.

At exactly 5:20 am, around 30 odd students of class 12 reach the place, and sit-crossed legged on the ground in front of Muneer as he begins the day’s lesson.

The weather plays an important role here. On a cloudy but rainless day, classes go on until 8:30 am, while a sunny start would mean early wrapping up since many students cannot bear direct sunlight.

An engineer-turned-mathematics teacher, Muneer started the free open-air classes last week where he teaches students of class 11 and 12.

A 2004 graduate of National Institute of Technology (NIT) Srinagar, Muneer has been teaching mathematics for the last two decades at Zaina Kadal here.

He managed to remain connected with his students even during the public agitations of 2008, 2010, and 2016, and never faced a situation where he had to halt the classes.

“However, I have been frustrated by this lack of concern for education during the last many months. I couldn’t stand the online classes because of the low internet speed and lack of interaction with the students, and decided to start this (open-air class),” he told The Kashmir Monitor after his classes finished Friday morning.

Before putting it into practice. Muneer discussed the idea with his existing students and briefed them about how they had to ensure that social distancing and other COVID-19 preventive norms were strictly followed.

“In a closed ambience, there is higher risk of COVID-19. Hence, I believe that such open-air classes, where all the safety norms are followed, could be an alternative until we are able to reopen educational institutions,” he said.

While Muneer teaches free of cost to any new-joinee, majority of his existing students had paid their winter fee upfront but couldn’t attend the classes.

“It wouldn’t be morally right to ask for the fee from anyone right now,” he said.

Muneer, who for 14 years worked as HoD Mathematics at the higher secondary division of Iqbal Memorial Institute, is helped by another fellow teacher in the initiative.

He said it was very painful for a teacher to see how academics continued to suffer even as most of the day to day activities, including businesses, have resumed functioning.

“We have resumed our normal lives and are even ripping apart social distancing norms but education is still stuck and students are suffering for almost a year now,” he said.

Muneer says that someone had to start while following all protocols and SOPs.

A class 12 student, Saima Hameed, who comes to attend the open-air class from Sekidafar area here, said she was really thankful to her teacher for taking up the initiative.

“All other educational institutes should follow it. It is much better than online classes because they were not really helpful especially due to low internet speed, and lack of interaction with teachers and students,” she said.

Another class 12 student, Atif Rouf from Batamaloo said he was able to focus better in the morning hours and joining the class has really helped him get back on track.

“During online classes, we were not able to study well. However, here we have a clear interaction with the teacher,” he said.

Muneer suggested other teachers to take up the initiative at their respective places.

“We can all contribute as I believe it is our moral responsibility to help students get back to books,” he said.

The teachers, he said, can take all the precautions and find some space in a park or a yard near them to teach students.