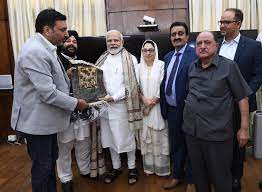 At a time when the Valley’s economy is looking to bounce back after successive Covid lockdowns, Prime Minister Narendra Modi held a meeting with the business leaders from Jammu and Kashmir last week in New Delhi. The meeting, which was coordinated by the newly appointed first woman chairperson of the Jammu and Kashmir Waqf Board Dr Darakhshan Andrabi, was held in a ‘friendly’ atmosphere as stated by the attendees. “We met like friends….the meeting was held in a cordial atmosphere. We talked in detail about the problems and concerns of the business community of Jammu and Kashmir. I told him (Modi) that the business community, especially the tourism sector of Kashmir valley, had suffered a lot and needed support from the centre for the revival of businesses. The Prime Minister assured us that he will look into the problems faced by us,” Patron of the PHDCCI, J&K chapter and J&K Hoteliers’ Club chairman Mushtaq Chaya stated after the meeting. The ‘friendliness’ reflected in the photographs that we circulated after the meeting and now the business leaders of the Valley are hopeful that their long pending demands will be looked into. Kashmir Chamber of Commerce & Industries (KCC&I) president Sheikh Ashiq too said they had high hopes that their issues will be addressed as the same had been raised on a ‘higher platform’. As per media reports, the KCC&I president said it was more than a meeting and interaction “because we were there to raise the issues of people currently facing in Kashmir and that there is a need for highlighting the issues of the business fraternity on higher platforms for an early and speedy resolution of the same.” The business community is excited as they have suffered a lot especially during the past few years.

While Kashmir has a long history of curfews and hartals alongside long spells of unrests, the losses of the community were compounded during the past three years. First, there was a lockdown post abrogation of Article 370 on August 5, 2019 that was followed by two subsequent lockdowns in 2020 and last year. Successive lockdowns in 2020 and 2021 had dented Kashmir region’s economy by over Rs. 45,000 cr as per the report released by a Valley based traders’ body. The report said the manufacturing sector suffered the maximum losses last year at Rs. 3161.60 cr followed by the transport sector at Rs. 2,888 cr. Similarly, the agriculture, horticulture, floriculture and agriculture sector suffered a loss of Rs 942.4 cr while the livestock sector suffered a loss of Rs. 2234 crore. It said the tourism sector lost Rs 1,292 cr while the hotel and restaurants suffered a loss of Rs 760 crore. Each day of lockdown had dented the region’s economy by Rs. 150 cr daily as per the estimates of the trade bodies. Though the government has not yet revealed the amount of losses suffered, it is a fact that the business community in Kashmir has been hit hard and requires assistance from the centre for revival.

The memorandum of demands, which was submitted to the prime minister, therefore should be considered on top priority by the centre. Most of the demands are genuine and can be met forthwith. For example, in view of the heavy rush of Umrah pilgrims and trips to the middle east related to business or work, the business bodies have demanded direct flight from the Srinagar International Airport to Jeddah, Sharjah and Dubai. The overall losses incurred over the years have resulted in an unprecedented level of stress on the working capital and finances of the local business establishments. Though there have been several interventions by the Government for extending support but the continuous cycle of disruptions has failed their objectives. Among other demands, they demanded soft loans and other sops for the development of businesses. The memorandum has also demanded upliftment of handicrafts, floriculture and tourism sectors. The handicrafts should get special attention in view of Srinagar making it to the coveted list of the United Nations Educational, Scientific & Cultural Organisation (UNESCO) in Crafts and Folk Arts Category for the year 2021. Piyush Goyal, Minister for Textiles, Industries & Commerce on his visit to Srinagar in October last year has assured several measures including setting up of Carpet Village that will give a fillip to the famed Kashmir carpet. These plans need to be implemented at the earliest. The delegation has further demanded that all handmade items should be exempted from taxes like GST. “To preserve the livelihood of Weavers, Artisans, Traders, and Exporters who are involved in handmade Handicraft and also the famous art of Cottage Industry, the GST must be waived off on Pashmina Shawls, Carpets, Papier Machie, Crewel, Chain Stitch and Wood Carving,” the memorandum submitted to Modi stated. The arrival of visitors in good numbers this year is a good omen for the tourism sector. However, tourism related infrastructure needs to be developed on priority basis.

In the past too, members of the business bodies have called on central ministers for the redressal of demands but so far their demands have not been met. Now that the business heads have met the prime minister, they have high hopes. It is hoped that the centre looks into the demands of the battered business community so that the economy of the union territory revives.