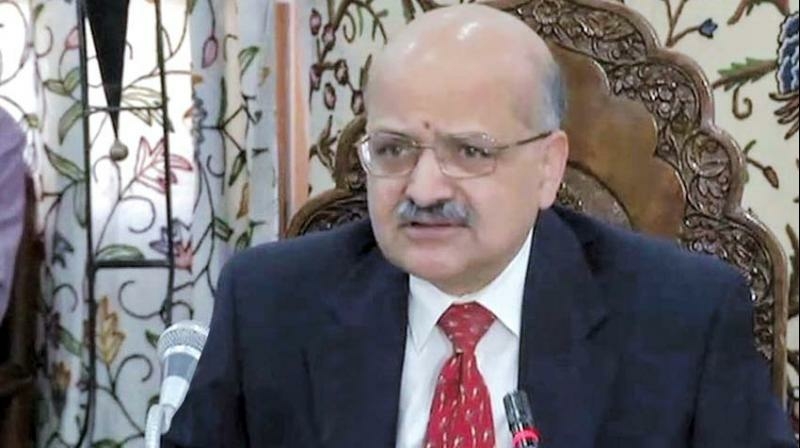 Srinagar:  On the first anniversary of Article 370 abrogation, Chief Secretary BVR Subrahmanyam said Jammu and Kashmir was a “broken state” and there was “no system” in place due to years of misgovernance, corruption and “unbelievable levels of fraud” committed by leaders of mainstream parties and separatist organizations

“Jammu and Kashmir was a broken state and there was no system in place due to years of misgovernance, corruption and unbelievable levels of fraud” committed by leaders of mainstream parties and separatist organizations,” he said.

Therefore, not a “single soul had cried” over the detention of political and separatist leaders in August last year, when the Centre announced its decision to revoke Jammu and Kashmir’s special status under Article 370 of the Constitution, he added.

Subrahmanyam, a 1987-batch IAS officer who was hand-picked by Prime Minister Narendra Modi to “clean up” the Jammu and Kashmir administration said misgovernance and corruption had continued for so long that the system collapsed from inside.

“People have to be patient to get a whole lot of benefits after the abrogation of Article 370 as what had happened on August 5 last year, have not been rolled out fully (yet),” he told a group of visiting journalists here.

On August 5 last year, the central government had announced abrogation of Article 370 provisions and bifurcation of the erstwhile state of Jammu and Kashmir into Union Territories (UT) — Jammu and Kashmir, and Ladakh.

Subrahmanyam said before he came to Jammu and Kashmir in June 2018, he met the prime minister and sought his guidance for his new assignment.

“The prime minister told me: Go, clean up the administration, rebuild it and hand over the ‘amanat’ (precious possession) to the local people,” he said.

The chief secretary said he has been working sincerely to create a robust institutional infrastructure that is free of corruption.

“There was a terrible situation here. Things were designed for corruption. Mis-governance and corruption were for so long that the system has collapsed from inside. The whole state was a big ponzi scheme,” he said.

Subrahmanyam said there were scores of incomplete projects, land acquisition was a big scam and there were instances when doctors working in the Middle East were drawing salaries in Jammu and Kashmir as it had no system of monitoring.

He said frauds in Jammu and Kashmir were at “unbelievable levels”. “There were frauds in jobs, frauds in projects, frauds were everywhere”.

“The JK Bank CMD was the scamster number one. Twenty families or a maximum 30 families milked the JK Bank. There was no accountability. All other PSUs (public sector undertakings) in other states submit their report to the assembly, the PSUs in other states come under RTI, CVC (Central Vigilance Commission). But the JK Bank is accountable to none,” he said.

Asked about how people felt one year after the abrogation of Article 370, Subrahmanyam said common men are not bothered about Article 370, what they expect is jobs, growth, and development and the administration is working in that direction.

He said once the administration delivers development, create jobs, people will realize the positive sides. “Delivery will happen. Reconstruction of the UT is not an overnight work. It takes time. The work is on,” he said.