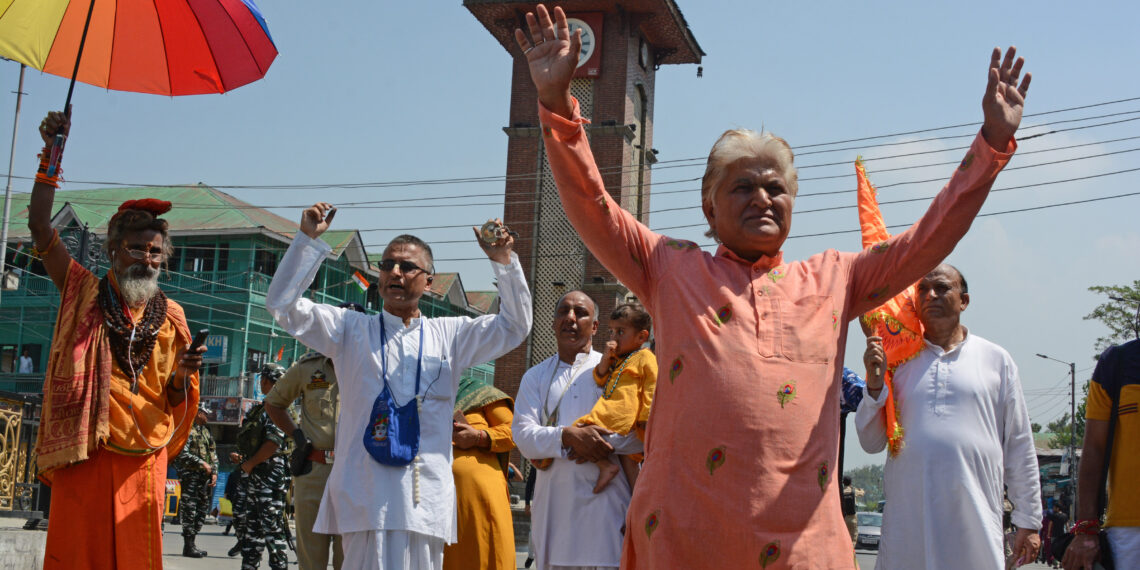 Srinagar: Leaving behind fear psychosis, Kashmiri pandits today took out a Shobha Yatra in the heart of Srinagar to celebrate `Janmashtami’.

Kashmiri Pandits prayed for Hindu-Muslim brotherhood and the return of the ‘pre-90 atmosphere’ in the Valley.

Though a lesser number of people were seen during the traditional ‘Shobha Yatra’, the spirits were very high.

“We prayed for a peaceful atmosphere and brotherhood, just like the pre-90 atmosphere when Hindus, Muslims, Sikhs, and Christians used to celebrate festivals together,” said Sanjay Saraf, who took part in the ‘Shobha Yatra’.

He congratulated the members of the majority community who were present on the occasion.

“Lesser number of devotees attended the Shobha Yatra this year as compared to previous years and I want to congratulate the majority community (Muslim) members that are here with us,” said Saraf.

Another devotee, who attended the Janmashtami Shobha Yatra, said: “All religions have conveyed the same message but certain forces do not want us to live in peace and harmony. Today, our Shobha Yatra has been made possible due to locals in Kashmiri. We all – Hindus, Sikhs, and Muslims have to be united and make the country strong.”

Chanting ‘Hare Krishna’ amid the blowing of conch shells and chants of Vedic hymns, Janmashtami processions were taken out in other parts of Kashmir as well including Mattan in Anantnag district and Handwara in Kupwara district.

Temples across the Valley saw a decent rush of devotees including the revered Kheer Bhawani shrine at Tulmulla in the Ganderbal district.

Mohan Lal Bindroo, who celebrated the festival at Tulmulla, too prayed for peace that prevailed ‘before 1990’.

“We stay at Jawahar Nagar and today we came to Tulmulla especially to pray to Mata that the same peace prevails that was here before 1990. We prayed for the betterment of the situation so the same brotherhood prevails as we would see before 1990,” he said.

The priest at the Kheer Bhawani temple also said they prayed for peace and communal harmony.

“We prayed that peace and harmony should prevail in the country and all – whether Hindu or Muslims live together,” he said.