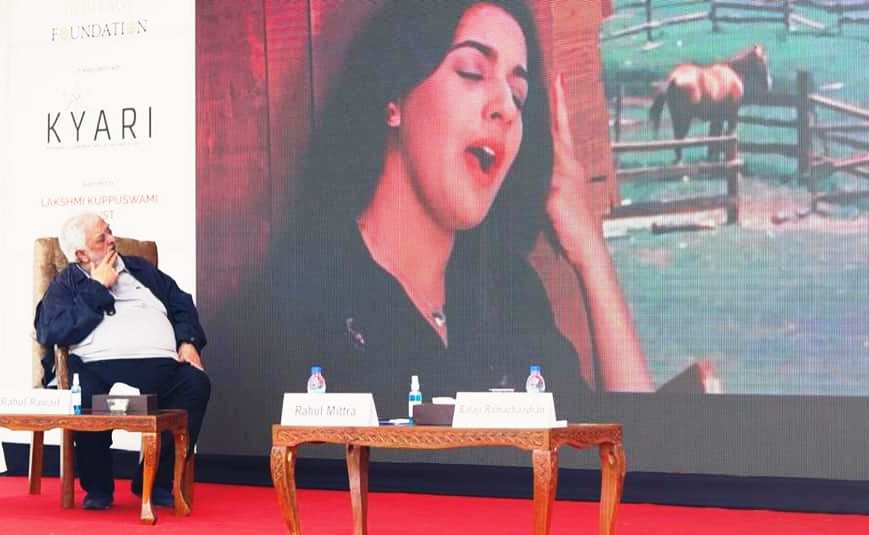 Processed with VSCO with preset

Srinagar: Back in the Valley after four decades, veteran film-maker Rahul Rawail on Wednesday fondly remembered the days when he directed Sunny Deol and Amrita Singh’s debut film ‘Betaab’ in South Kashmir.

Stating that he was having a ‘sense of déjà vu’, Rawail hoped to see the return of ‘wonderful years’ in Kashmir.

“For me when I landed in Srinagar, there’s a sense of déjà vu because I came exactly 40 years to the date from Mumbai to Srinagar. I last came four days before Dhanteras during Diwali days in 1982. And yesterday, I came again (days before Diwali). It was a moving experience. I have had wonderful days here and I am sure it will turn into wonderful days again, all thanks to the efforts of the government,” Rawail said at the inaugural ceremony of the Kumaon Literary Festival.

The two-day festival, which is hosting authors and film personalities from different parts of the country, is being held at the SKICC on the banks of the Dal Lake.

The 1983-released hit film ‘Betaab’ was shot majorly the year before near a location close to Chandanwari that later became popular by the name ‘Betaab Valley’.

“While shooting for Betaab, I was driving towards Chandanwari and saw a spot from above the road. I asked the driver to stop and I reached a stream that connected to a place where I had shot ‘Love Story’. I started walking three km and then I landed up seeing the most beautiful place in the world….something brought me there. I am very proud that this place is now called Betaab Valley,” Rawail said.

Rawail further said he hoped to see Kashmir ‘back in the same glory’ when Bollywood would camp in the Valley.

“I hope to see Kashmir back in the same old glory when everybody in Mumbai used to look forward the entire year – whether we will go to Kashmir or not,” he said.

He thanked the organizers of the festival for bringing the event to Kashmir. “You have brought this literary festival all the way to Kashmir. It has been a wonderful journey. How they are moving to different parts of the country, and that itself says more than anything else. You brought me here not for a holiday but I have taken it as a holiday,” he said.

National award-winning actress Divya Dutta attended the discussion about her book: ‘The Stars in My Sky: Those Who Brightened My Film Journey’.

She too said she was glad to be in Kashmir and called the location where the festival is being held ‘kamal ka venue’.

“So delighted to be here…it is a kamal ka venue near the Dal Lake,” she said.

Usually known for her acting skills in films like Veer Zaara, Delhi-6, Bhaag Milkha Bhaag, and others, Divya said she had started writing in her school days only.

“I used to write for my school and college magazines and teachers would say – get a story written by her. I really wanted to sell stories and later started to write weekly columns. I realized I have a connection with the readers when a reader hugged me at an airport and told me not to stop writing,” she said.