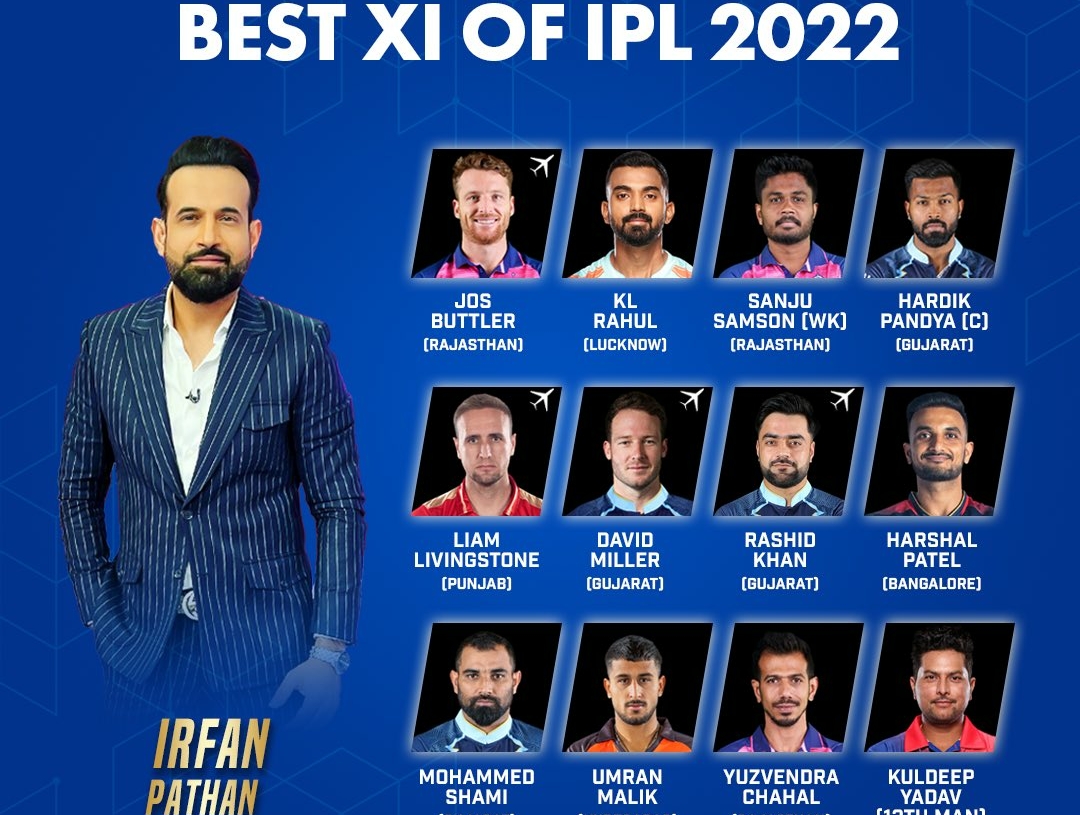 J&K pace sensation Umran Malik has made it to the list of Irfan Pathan Best XI of the IPL 2022.

Malik, who was also named the Emerging player of the season, impressed everyone with the ability to consistently clock deliveries at 150+ kmph.

Umran was quite a find this season. Jammu and Kashmiri pacer finished with 22 wickets for the season.

Pathan’s lineup starts with Jos Buttler and KL Rahul in the opening slot. While the former, being a part of the Rajasthan Royals, finished with 863 runs in the season with four centuries and four half-centuries to his name, the latter finished with 616 runs, which included two centuries and four half-centuries. Both the players performed in the playoff stage, with Buttler making it to the finals with RR.

Pathan chose Rajasthan Royals skipper Sanju Samson for the No. 3 spot. Samson led his side into the finals of the IPL 2022, the first time the team entered the finals since the inaugural season. Samson’s composure with the bat was something to look out for this season, and though he managed to score only two half-centuries in 17 games, he played some crucial knocks accounting for the team’s victory.

Pathan’s middle-order batters include the IPL 2022 winning skipper Hardik Pandya, followed by Punjab Kings’ and GT’s prolific power-hitters Liam Livingstone and David Miller respectively. While Pandya was successful in leading his side to their maiden IPL title in their first-ever outing of the league, he was also a crucial all-rounder as he marked his return with the ball. Livingstone and Miller were the saviors for their team as they came out to bat when the side needed someone to anchor the innings and play the finisher’s role.

Pathan included two bowling all-rounders in his XI in the form of GT vice-captain Rashid Khan and Royal Challengers Bangalore’s Harshal Patel. Rashid ended up with 19 wickets this season in 16 matches, whereas Patel scalped the same number of wickets in 15 games. The spinner had a better economy, 6.60 as compared to Patel’s 7.66 this season, and both hold the ability to provide their team with the crucial wickets.