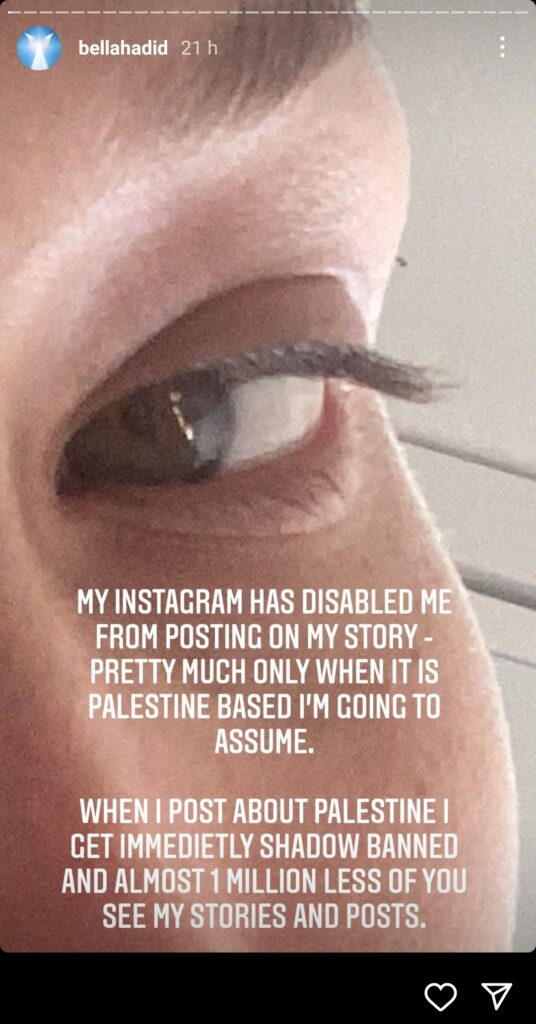 “My Instagram has disabled me from posting on my story – pretty much only when it is Palestine based I’m going to assume,” the 25-year-old wrote on her Instagram story.

“When I post about Palestine I get immediately shadowbanned and almost 1 million less of you see my stories and posts,” she added.

Hadid posted a screenshot of what appeared to be an attempt to re-post a video of Israeli forces assaulting an elderly Palestinian man, captioning it, “Won’t let me repost…for 2 hours now.”

“Woke up this morning and my @instagram account is not functioning. Clearly, the shadow was banned due to posting a video of Al Aqsa being attacked. Nothing inflammatory about what I said at all. Unbelievable,” he tweeted.

“Where is accountability for these companies that not only employ Muslims but even solicit Ramadan programming from Muslim community leaders only to ban them when they seek to raise awareness of our plights,” he added.

They destroyed the gates and windows of the Al-Qibli prayer hall and fired sound, gas, and rubber bullets at those stationed inside it.

Bella has been a consistent fighter for Palestinian rights and was the subject of an attack by Israel’s official social media account in 2021 after taking part in a rally in New York.

Bella Hadid is the younger daughter of Palestinian American Mohamed Hadid, who is an architect and real estate developer, and Dutch-born model Yolanda Hadid.

Elder sister Gigi is a supermodel and younger brother Anwar is also a model.