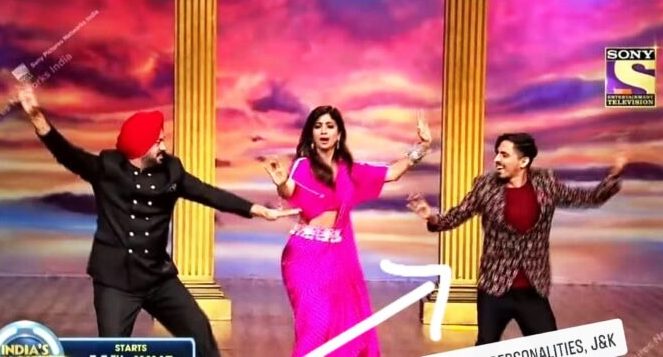 Srinagar: Jammu and Kashmir  comedian Amit Singh Andotra aka ‘Chui’ has reached India’s top laughter championship and his acts are leaving everyone in splits on the show.

His jokes revolve around topics like ‘confusing’ the Jammu region with Kashmir valley by people outside the union territory and internet shutdowns.

Impressed with the stand-up act of ‘Chui’ on the stage of ‘India’s Laughter Champion’, Shilpa Shetty even danced with the comedian from Jammu and Kashmir.

Hailing from Kathua, ‘Chui’ said sharing the stage with top Bollywood actors and comedians was a dream come true for him.

He further said he wanted to be famous and continue to pursue his passion for comedy and acting.

“I wanted to be famous and would watch cassettes of comedy shows in my childhood. Later, when I performed on local channels (in Jammu), my acts were appreciated that gave me some motivation. That time, I didn’t know what acting was,” he said.

However, ‘Chui’ said after performing in ‘Open Mic’, Chandigarh, his life changed.

“In 2018, I shifted to Chandigarh and started taking part in Open Mics and that is when I realised that stand-up comedy is not just about imitating people. One has to come up with his own jokes to be successful,” he said.

His performances have also cheered up the netizens in Jammu and Kashmir.

“proud moment for all of us in kathua, jammu & Kashmir (sic),” Sandeep Dhadwal commented on Facebook.