‘Indian agencies’ responsible for the killing of Yusuf Nadeem: Geelani 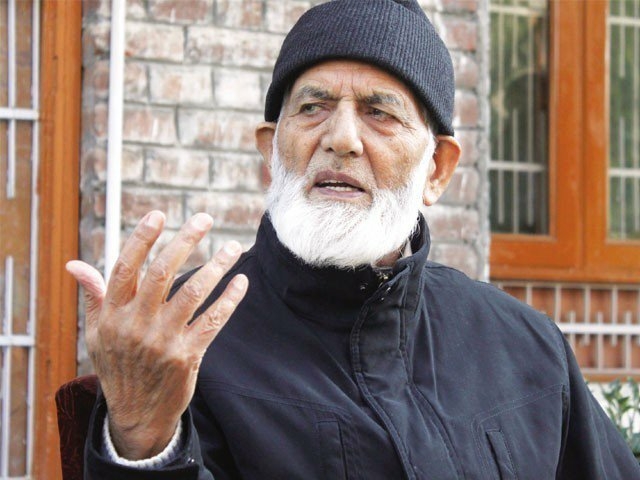 Srinagar, Feb 13: Blaming Indian agencies for killing of Mohammad Yusuf Nadeem, Hurriyat executive council member and secretary general of Tehreek-e-Wahdat e Islami, Syed Ali Geelani said that agencies are reviving the Ikhwan culture in Kashmir Valley.
In an emergency meeting, Huriyat chairman while paying glorious tributes to Yusuf Nadeem, said that it is a personnel loss for me and “I am deeply pained by the killing of Nadeem. I condole his demise and express my condolence to the bereaved family,” Geelani said in a statement.
Geelani said that we are shocked over his death by brute hands and his untimely demise has created a void and added that he was a legend par excellence. We stand with the grieved family and we express our deep and heartfelt condolences and pray for his heavenly abode”, said Geelani.
Meanwhile on the directions of Syed Ali Geelani ,Hurriyat Conference  organized a condolence meeting at Sindhipora Budgam and executive council members including  Nisar Hussain Rather , Patron Tehreek-e-Wahdat -e-Islam, Gulshan Abbas (Wahdat-e-Islami), Haji Ghulam Nabi Sumji  (Secretary General Hurriyat Conference), Advocate Muhammad Shafi Rishi, Mohammad Shafi Lone, Syed Mohammad Shafi, Ghulam Mohammad Nagu, Mohammad Yasin Ataie, Ghulam Ahmad Gulzar Mohammad Yusuf Mujahid, Syed Imtiaz Haider, Peer Abdul Rashid, Bashir Ahmad Bhat ,Mohammad Maqbool and several others  paid rich tributes to slain  Mohammad Yusuf Nadeem for his praiseworthy contributions for resistance movement .The leaders and mourners while hailing the services rendered by Mohamad Yusuf Nadeem, said that he was a torch bearer for the ongoing freedom movement .
While paying tributes to slain leader, Huriyat leaders said that late Nadeem had a unique personality and left a void that will never be filled ever and pledged that these cowardly and brutal tactics and state sponsored tactics won’t deter them from pursuing their mission, nor will these suppressive and aggressive measures will make them surrender.
We will take our mission to its logical end, pledged the leadership during the condolence meeting, saying that despite these killings by agencies, resistance movement won’t stop and will move ahead with its cherished mission, till we achieve our goal.
Meanwhile, Hurriyat Conference has called a condolence meeting of its constituent parties and other resistance organisation onFebruary 15, Thursday at 11 am at the residence of slain leader.
Hurriyat conference strongly condemned the detention of Molvi Bashir Ahmad Irfani, Syed Imtiyaz Ahmad Shah, Ab Rashid Lone and Zahid Ahmad, saying they are being subjected to brute torture in police custody in Trehgam Kupwara police station.

Thousands attend funeral of local soldier, his father in Tral