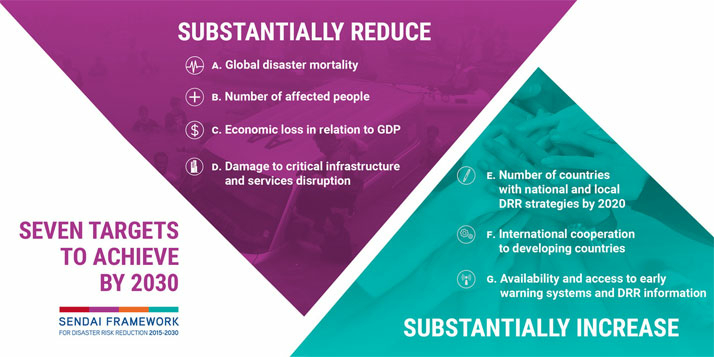 Srinagar, Feb 28: Except beginning the process of hiring a few data entry operators, the J&K Disaster Management Authority (DMA) has hardly done anything to implement the ‘Sendai Framework for Disaster Risk Reduction 2015-2030’ approved by the United Nations back in 2015.
The Framework was endorsed by the UN General Assembly and adopted by member states in March 2015 including India. A 15-year agreement, the Framework recognizes that the primary role of any state is to reduce disaster risk.
Official sources, however, told The Kashmir Monitor that J&K DMA has done “least groundwork” to implement the ‘Framework including its listed targets, and ‘priorities for action’.
DMA these days is in the process of hiring ‘Date Entry operators’ for implementation of Sendai Framework.
That is about it.
On the ground, hardly anything seems to have been achieved.
For instance, the DMA was supposed to establish disaster stores in elevated areas of Srinagar, considering the threat of floods always looms large in this city.
“None of such stores have so far been established, although the authorities have received clear directions recently from the Chief Secretary to set up the same,” sources added.
Similarly, the authorities have not specified any particular buildings which can be used as disaster management centers in case of exigency.
The Sendai Framework, as per a copy of it available on the J&K DMA website, has a very simple goal: “Prevent new and reduce existing disaster risk through the implementation of integrated and inclusive economic, structural, legal, social, health, cultural, educational, environmental, technological, political and institutional measures that prevent and reduce hazard exposure and vulnerability to disaster, increase preparedness for response and recovery, and thus strengthen resilience.”
J&K is a multi-hazard region falling in Seismic Zone IV and V. Low lying areas of Kashmir and parts of Jammu are flood prone and upper catchments of all the tributaries of the Jhelum, Indus, Chenab and Tawi rivers are prone to flash floods. Areas in high reaches are prone to avalanches and the hilly areas to cloudbursts, areas alongside highways are prone to landslides.
Since 2017, J&K, as per official data, has witnessed as many as 28 major avalanches killing around 100 people.
Professor Shakeel Romshoo, head Department of Earth Sciences Kashmir University told The Kashmir Monitor that ill-planned constructions in avalanche-prone regions make the inhabitants susceptible to the calamity.
“The Disaster Management Department should come up with Avalanche Hazard Zones, which maps the vulnerable areas and ensures that no construction activity takes place,” he said.
For two consecutive days, The Kashmir Monitor attempted to reach the officials at J&K DMA.
While Special Secretary Disaster Management Simrandeep Singh’s official phone number was continuously out of reach, Director Disaster Management Aamir Ali disconnected number of calls.