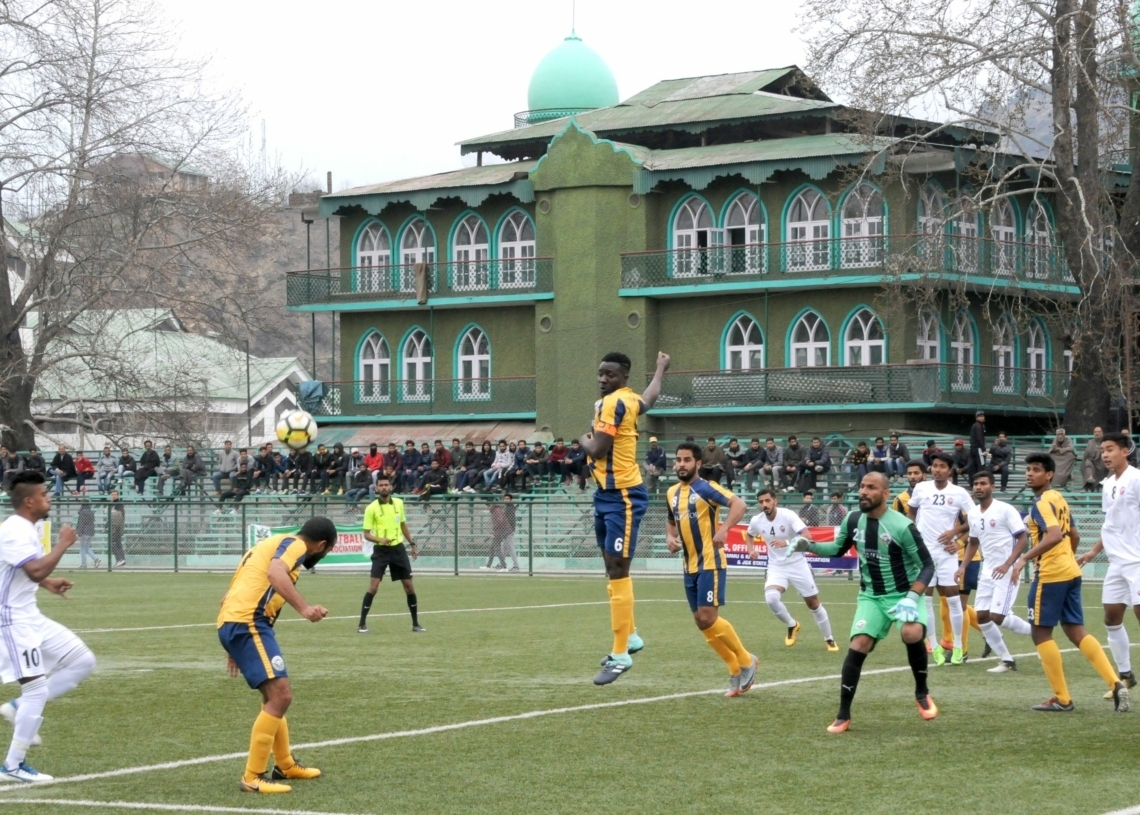 Hi guys! It is football fever in the valley. While Premier division league has entered into the final round, top-notch I-league (2nd Division) preliminary round group A has started with the kick off on 20th of this month on the AstroTurf, when the local lads of Lone Star FC locked horns with Delhi Dynamos FC in the inaugural match. Lone Star FC is born tough! Lost it closely though. As I type this column, the final whistle on Real Kashmir FC Vs Pune City FC is already blown. The match has ended in a goalless draw (0-0).

League football is a hierarchy of leagues between consecutive levels of the hierarchy called pyramids. It is due to their tendency to split into an increasing number of regional divisions further down one descends, forming a pyramid. League systems of some sort are used in football in almost all countries across the globe. The movement up and down the pyramid happens through the process of promotion and relegation, in which teams from a lower league who finish atop the standings in their league can advance to the next level of the pyramid, while teams in higher leagues who finish last are expelled and move down the pyramid. In most association football pyramids, this process is automatic each year.

The English Football League (EFL), founded in 1888 as the Football League, is the oldest such competition in world football. It was the top-level football league in England from its foundation in the 19th century until 1992, when the top 22 clubs split away to form the English Premier League (EPL)

In the Indian context, premier league tournaments include the I-league and the ISL (Indian Super League). I-league, officially known as Hero I-league, is presently contested by 10 clubs and it operates on a system of promotion and relegation with the I-League 2nd Division as well as a system of direct-entry. The latest (2017-18) was the 11th edition of the I-league which was won by Minerva FC Punjab. Move down the Pyramid, I-League 2nd Division is the second-highest division in the Indian football league system after the I-League.

I-League 2nd Division was introduced for the 2008 season, having been previously known as the National Football League 2nd Division. The winners of the last edition of the tournament (2016-17) were NEROCA FC, a professional club based in Imphal, Manipur.

This I-league (2nd division) brings in eighteen teams to play high-quality football in the country. Eighteen teams comprising of seven ISL clubs’ reserve teams (Except ATK, Northeast United FC, Mumbai City FC) who will compete in the preliminary round are divided into three groups. The Preliminary round which kicked-off on March 16, 2018 will continue until May 15, 2018. Teams will play on a home and away basis within the group. The winners of each group plus the best second-placed team would qualify for the final round. However, if reserve teams of ISL clubs finish as winners or runners-up in any group, the position will be passed on to the next non-ISL team. Four teams will play at the central venue on a ‘single-leg’ league system which will run from May 21, 2018 to May 27, 2018 at the end which the winners would be promoted to the next tier of Indian Football i.e. I-League.

Here in the valley, we are all set to watch exciting football through I-league (2nd division) scheduled to be played between six teams in group A till 13th May, 2018. Group-A includes two professional clubs from the state including Real Kashmir FC (RKFC)  and Lone Star FC (LSFC), who will fight it out with outside state clubs including Hindustan FC, Delhi Dynamos FC (reserves), Delhi United FC, FC Pune City (reserves). Each team will play a total 10 matches including 5 home and 5 away matches, and the winner of the group will qualify for the final round.

According to Fahd Khan, LSFC Marketing & Publicity Manager, Lone Star FC has already done wonders in season 2014-15 when it emerged as the first runner up in the group stage. Moreover, in the season (2016-17), Lone Star FC striker Aakif Reshi emerged as the best goal scorer (Indian player) with aggregate 11 goals, only behind two foreign players.

Traditionally, the football season in the valley would start in April, but the introduction of I-league (2nd Division) complemented by the all-season astroturf of the J&K Sports Council has stretched the football season as a 12-month exercise, with the spectators witnessing high quality game throughout the year. It has also given local boys the much needed platform to compete with better teams, thereby enhancing the quality of football played by them.

As this leg of I-league (2nd division) would come to an end, there would be a lot to be happy about. A few hotels would have got business to do throughout the tournament, many outside players would have gone for site-seeing, shikara riding and of course, would have had wazwan, hareesa and nun chai (Chai Jaai hai na!), and bought dry fruits from Amin-Bin-Khaliq (ABK-the Dryfruit People).

I-league was not only about football – it was sports tourism man!

Tourism and sports each contribute a great deal to the economies of many countries globally. In present times, public policy makers and economists are busy reorienting the local economies to their core competence. And of course, tourism is our core competence.

From economic point of view, hosting of sports events like I-league here is a marriage of tourism and sports.  A combination of the two i.e. sport tourism has many economic benefits. Primarily, it creates economic growth through filled hotels, restaurants and retail establishments, helps in building new infrastructure facilities, provides youth training and spectator entertainment, creates exposure and enhances a positive image for the community, creates new product, a new tourism destination, maximizes facility use within the community, builds community relationships and strengthens corporate support. It also attracts high-yield visitors, especially repeaters meaning increased rate of tourism growth. Besides, marketing the capability of the community, it helps increase community support for sport and sport-events.

Although, hosting I-league over the last 3-4 years has been quite successful with the support of J&K Football Association and J&K Sports Council, yet to set a benchmark as a hosting state, there is ample scope for improvement. To mention, while AIFF guidelines require to have three showers in each dressing room, we are still managing with a single shower for two dressing rooms. Our astroturf is quite good, but the campus lacks a proper medical room, an ambulance etc. Under AIFF guidelines, we have to have 13-seater covered dug-outs but ours forcefully accommodates 11 – that too without a cover.

It is not only for the Government to pump in resources for development of the game of football, private sector participation would definitely boost it. If Reliance can sign a Rs. 700 crore deal for ISL, we have many business houses to spend lakhs, at least. After all, top-class club football is a profitable venture – for those who understand this business. Growing football craze across the country presents many opportunities to invest in football and ancillary business and sports tourism is waiting for its turn. One thing it needs is marketing – a balanced mix of 4Ps of Kotler. And events like I-league (2nd division) do it well!

JK has higher prevalence of Tuberculosis in capital cities