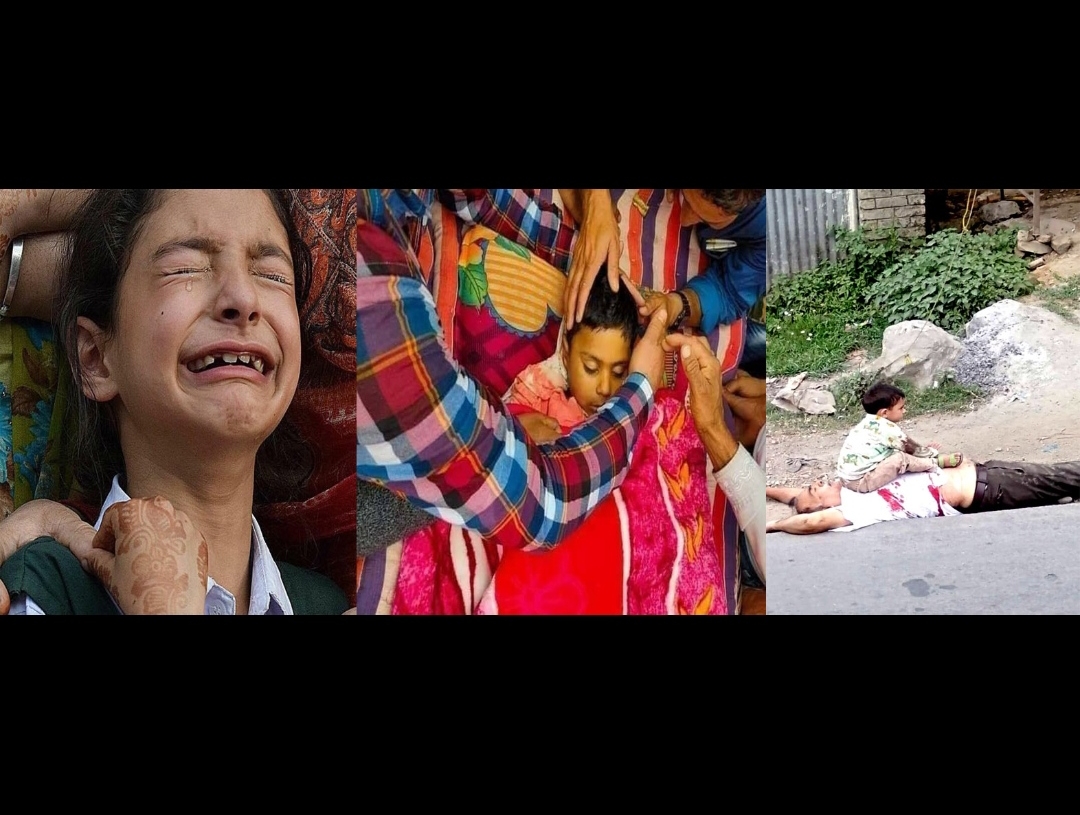 SRINAGAR:  A three-year-old Ayad Jehangir trying to wake up his slain grandfather on a roadside has become the new face of conflict victims in the strife-torn Jammu and Kashmir.

The boy miraculously survived the militant attack on a CRPF patrol at Sopore but his grandfather Bashir Ahmad Khan was not lucky. Khan, a contractor by profession, had gone to Sopore to take stock of the works.

However, when he reached Model Town, there was an exchange of firing between the militants and forces.  In the incident, a CRPF soldier and  Khan were killed, while three soldiers were injured.

An eerie silence enveloped the area after the firing. Unmindful of his grandfather’s death, Ayad frantically tried to wake him up.  When he did not succeed, he sat on his chest like he used to do while playing with him at home.

Pictures of Ayad sitting on his grandpa’s body with a soldier taking a position in a nearby alley created a flutter. Later pictures of Ayad being rescued by an officer became viral on social media.

Tears swelled the eyes when a 22-second video of inconsolable Ayad became viral on different social media platforms. In the video, someone whose face is not visible is offering biscuits to the toddler who insists on going home.

“They had left for Sopore soon after Fajr prayers. Babloo (Ayad) insisted to accompany his grandfather. When he did not budge, his grandfather agreed to take him along. Babloo was in his lap when he was shot dead. You might have seen how he was trying to wake up his grandpa,” said Farooq Ahmad, son of Bashir Ahmad.

Police, however, refuted that he was brought down from car and killed. “The news surfaced on some social networking sites that the civilian was brought down and killed is totally baseless and is far beyond the facts, Sopore Police refutes and denies the news and legal action shall be initiated against the false reports and rumors,” tweeted Sopore police.

This is the second incident in the last week when children have become the victims of the conflict. Last week a six-year-old boy and CRPF soldier were killed in Bijbhera. Mehaan Yaseen’s father Muhammad Yaseen Bhat survived the attack, but he was not lucky.

Bhat, a physical education teacher at a school in Bijbehera had taken Mehaan to the market to buy clothes for him.

“All of a sudden there was firing. Everybody ran for cover but my son couldn’t. When I looked at him, I saw blood oozing from his right shoulder. He was hit by a bullet. Mehaan was my world, I lost everything today, “Bhat said.

Children have been the biggest casualty of the Kashmir conflict. For the last 30 years, Kashmir has produced an army of orphans. If it was a police officer’s daughter Zohra in 2017, it is Mehaan and Ayad in 2020.

Donning school uniform, Zohra sobbed frantically when she was brought to the wreath-laying ceremony of her father Assistant Sub Inspector Abdul Rashid Pir who was killed while regulating traffic at Anantnag’s Mehndi Kadal in August 2017.

The tragedy even moved the battle-hardened Jammu and Kashmir police to the extent that the then deputy inspector general of the police, South Kashmir Range, SP Pani penned an emotional letter to comfort the minor girl who brought tears even to the stone-hearted person.