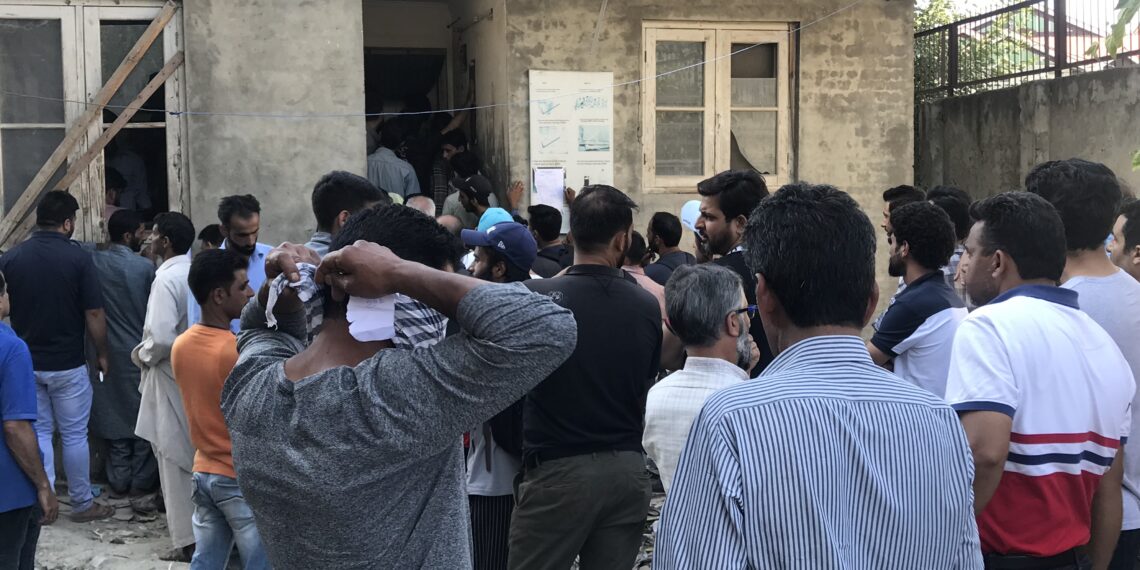 Srinagar: Mehrajuddin Akhoon had reached the Regional Transport Officer (RTO), Srinagar early Monday morning to get his High-Security Registration Plate (HSRP) fixed on his vehicle. He was given a waiting number of 280 and by late afternoon, he was still waiting for his turn.

“I came in the morning only as I was given today’s date by the RTO to get the plate fixed. Though I had applied over a week back, I was given serial number 280 for today but now it is 4.00 pm and so far they have finished up to number 240 only. The RTO, Srinagar should deploy more staff and have more windows for fixing HSRPs. On one hand, we are being made to wait endlessly and on the other, the Traffic Police has stepped up its drive against those who do not have these HSRPs,” he said.

Like Akhoon, hundreds of others have been waiting in long queues for the past many days to get their HSRPs.

However, an RTO official present at the site where the HSRPs were being fixed, said they were working overtime to get the work done.

“For the past many months, we have been urging the people to get these HSRPs fixed. However, the people ignored repeated warnings and now there is a sudden rush after the government cracked the whip against violations. Today, we have taken 460 forms for fixing HSRPs. We are doing our best to expedite the process. Even if we have work till 10.00 pm, we will complete fixing all the plates,” the official said.

People in the Kashmir valley for long had been demanding that J&K too should start online bookings of HSRPs like other states and union territories of the country.

The RTO official said they had also started online bookings of HSRPs now. “We are aware that the rush is increasing and therefore, we started an online facility too recently. Now, people can do the booking of HSRP through online mode via (https://realmazon.com),” he said.

Traffic Police had issued reminders too

SSP Traffic City Srinagar Muzaffar Ahmad Shah too said the past reminders to the people to get HSRPs fixed had fallen on deaf ears.

“We have made repeated requests in the past telling people to get HSRPs fixed. As far as Traffic City Srinagar is concerned, we have been requesting people since January to get the plates fixed,” the SSP Traffic told reporters.

Following a Supreme Court (SC) order, the Ministry of Road Transport and Highways (MoRTH) had made it mandatory for all vehicle owners to fix a high-security registration plate and color-coded plate on their vehicles.

It is pertinent to mention that the HSRP is an aluminum-made high-security registration plate that is fixed on a vehicle using two non-reusable locks.  In Srinagar, the locks are fixed by the RTO office only. A chromium-based hologram of Ashoka Chakra of 20 mm x 20 mm size is applied by hot stamping on the top left-hand corner of the plate in both front and rear plates to protect against counterfeiting. The permanent identification number (PIN) of a minimum of 10 digits is laser branded into the reflective sheeting on the bottom left-hand side of the registration plate with a letter size of 5 mm. The HSRP is linked electronically to the vehicle after its affixture on the vehicle on registration.