Handwara boy killed in shootout buried far away in Baramulla 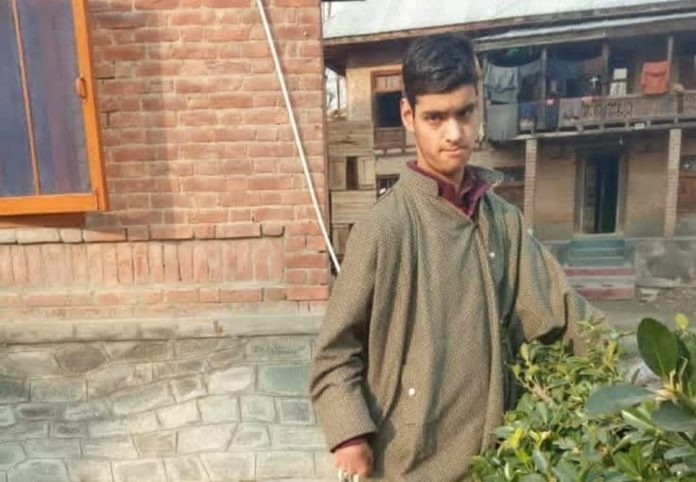 Hazim Shafi Bhat who was killed in the shootout in Handwara on May 4 (Photo courtesy: Deceased’s family)

Srinagar: The body of the 14-year-old boy killed in Monday’s shootout at Handwara was not handed over to his family and instead, the deceased was laid to rest Tuesday morning at Sheeri Baramulla in the same graveyard where unidentified militants are buried.

The boy Hazim Shafi Bhat, a handicapped class 7 student of Qaziabad, was killed during “cross fire” at Wangam, Handwara Monday evening when during a shootout three CRPF personnel were killed.

Khazir Mohammad Bhat, uncle of the deceased, told The Kashmir Monitor the police and district administration informed them that the body would not be given to the family and instead be buried at Sheeri.

“We spoke to police as well as officers of district administration pleading them to return the body to us but they did not. He (Hazim) was buried at Sheeri today morning at around 7 am,” he said.

Another family member of the deceased said they were told that if they didn’t agree to the terms, the authorities will go ahead with burying the boy without the family members’ presence.

The family had to give in and eventually a dozen odd members travelled all the way to Sheeri Baramulla today morning to attend the last rites of the boy.

On Monday, the incident took place when unidentified militants attacked 92 battalion CRPF (A Coy) party at Wangam at around 5:30 pm. In the attack, two CRPF men were killed on the spot while several others suffered injuries and later one among them succumbed to the injuries on way to the hospital.

The paramilitary personnel retaliated and the exchange of fire continued for around five minutes, reports from the area said.

As the guns fell silent, one more body, that of Hazim, was spotted around half a kilometre away from the shootout site.

“He along with other boys in the area had taken animals for grazing. While others fled, he could not as he was physically handicapped. He could not even properly talk and would occasionally fell down,” Mohammad Rayeez, his immediate neighbour was quoted saying by a local news agency on Monday.

SP Handwara Dr Sandeep Chakravarthy was not available for comments.

An official at his office said he was busy in a meeting.

Earlier on Monday, police in its statement said a civilian was killed “during the exchange of fire” at Wangam crossing in Kralgund area of Handwara.

The police said that a case had been registered and further investigation was going about the circumstances of the killing.