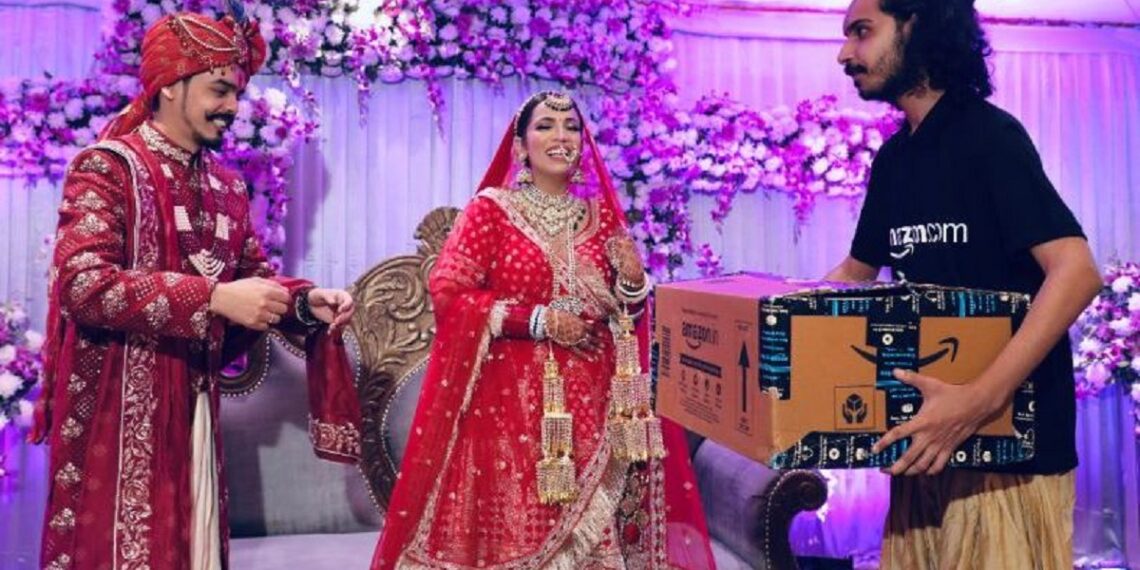 A Google manager marrying an Amazon group operation manager in Hyderabad saw a bizarre wedding-day skit that left the guests and the social media users wondering what was it.

Krishna Varshney, Google ads manager at Regalix, married Faguni Khanna, group operation manager at Amazon. While marriage is a union of two persons, this one saw marketing through brand integration stunning people all around.

Krishna Varshney the groom pretended that he had lost the varmala (wedding garland) minutes before the ceremony. He then ‘ordered’ another varmala through Amazon.

“I gave a surprise to my Amazonian wife Faguni Khanna by creating an act of Varmala getting lost and then I ordered it from Amazon,” he wrote while sharing a photo which shows the varmala, kept in an Amazon box, being delivered to the laughing couple on stage.

“Just doing a brand Integration with love for my love,” added Varshney in his LinkedIn post.

The post is going steadily viral on LinkedIn, where it has registered more than 5,000 ‘reactions’. It proved to be a polarising stunt. Whereas many praised it as innovative, others were less impressed, criticising Varshney for turning his big day into a brand circus.

“Making your big day about your work is rather sad, but to each his own,” opined one person. “This is cringe even for LinkedIn,” said another.

Sentiments were similar on Twitter, where a screenshot of the post being circulated has received overwhelmingly negative comments.

But some were more forgiving – praising the stunt as “cute and creative.”

“Lifetime prime membership… Congratulations,” quipped one commenter. “Such a cool gesture,” another agreed.