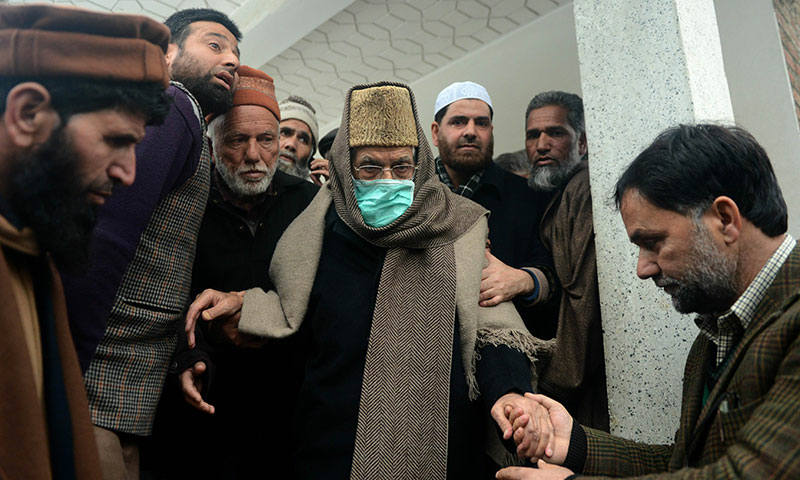 Srinagar, Dec 18: Hurriyat Conference (G) chairman, Syed Ali Geelani was taken to Sharp Sight Centre of Florence hospital Chanpora this morning for his eye checkup, a spokesman said.
Hurriyat (G) spokesman in a statement issued said a team of noted ophthalmologists conducted several tests of the pro-freedom leader and performed a minor surgery of his right eye.
“After the procedure he was discharged from the hospital with the advice of complete rest and to avoid dust and cold. He was accompanied by his office bearers and both his sons. Doctors further advised him for post procedure checkup,” he said.
Meanwhile, as per the JRL program, pro-freedom activists and workers offered Nimaz-e-Jinaza in absentia at various places.
Hurriyat (G) leaders and workers including Mohammad Rafiq Uwasi, Molvi Bashir Irfani, Mukhtar Ahmad Sofi, Rameez Raja, Imtiyaz Ahmad Shah, Shakeel Ahnmad Bhat, Asif Raja, Nadeem Ahmad, Mohammad Imran Bhat, Mubashir Ahmad, Mohammad Umar and large number of people offered Nimaz-e-Jinaza in absentia at Amirakadal Lalchowk .
While condemning the killings of innocents in Pulwama, leaders said that unprovoked firing by the forces has proved it beyond doubt that government of India is on a well-planned mission of genocide of Kashmiris.”
“Despite this harsh and un-proportional response to the peaceful protests, our resolve for freedom will never dilute nor can we compromise on the noble mission of our martyrs,” they said.