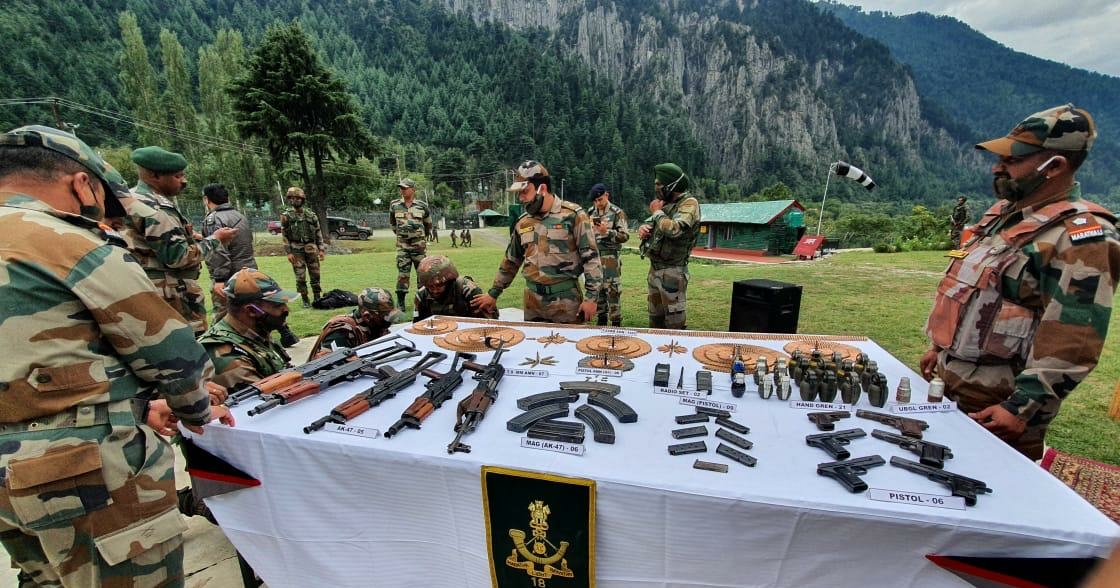 Srinagar: Army on Tuesday said it recovered five AK series rifles, six pistols, 21 grenades, along with other cache of ammunition along the Line of Control in Rampur sector of north Kashmir’s Baramulla district.

Srinagar based defence ministry spokesman Col Rajesh Kalia said that on August 30, movement of suspicious persons was detected along the Line of Control in Rampur Sector.

The movement, he said, was from a village close to the LoC and the suspects had crossed into this side of Kashmir.

“Their move was kept under constant surveillance,” he said, adding, “Due to adverse terrain, thick foliage and bad weather conditions, alert was sounded for likely infiltration attempt. Surveillance grid was beefed up across the area and ambushes were re-sited to thwart any such attempt. Surveillance continued through the night”.

Subsequently, he said, on Monday at around 5 am, search of the area was carried out.

“After extensive search of seven hours, a huge cache of arms and ammunition were recovered from well concealed locations in two hideouts in Rampur Sector,” he said in a statement.

“The suspected modus operandi is to drop warlike stores in caches near the LoC and subsequently OGWs or militants would pick the same for further transportation into the hinterland for militants activities.”

“As reported earlier, similar attempts were made on 22 July 20, when inputs were received regarding likely weapon drop along the Line of Control ahead of the anti-infiltration fence. During the search operation along the Line of Control in Rampur Sector, Baramulla, one AKS-74U with magazines, 05 pistols (one with Chinese markings) and magazines, 24 grenades and other warlike stores were recovered,” he said adding “The modus operandi shows desperate attempts by militant groups to infiltrate weapons into J&K with active connivance of Pakistan Army. Robust surveillance and Line of Control domination activities will continue to deny all such misadventures.”