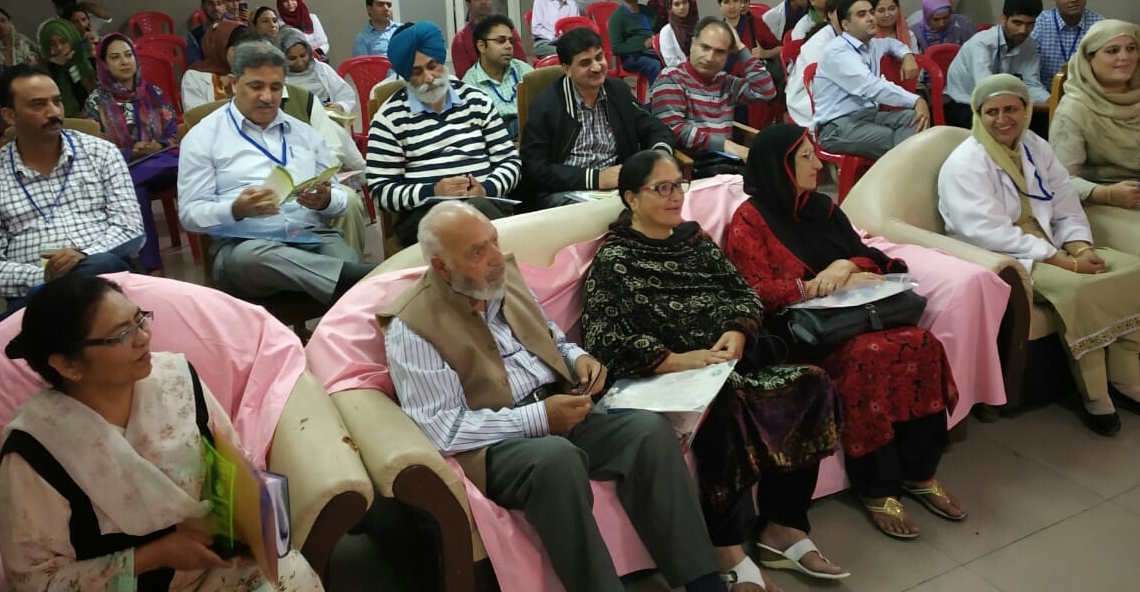 Geriatric Medicine is a branch of medicine that deals with the treatment of elderly people.

The conference, conducted in the hospital audit, aimed at creating awareness among senior citizens in general and medical fraternity in health services in particular about Geriatric Medicine, besides the sensitization regarding Geriatric OPD at JLNM Hospital.

As Geriatric Medicine OPD saw an overwhelming response from the elderly patients, in the best interest of health care of elderly patients as well as public demand, Geriatric Orthopedic OPD (Ortho-Geriatrics) was started in September 2018, on every Wednesday.

On the occasion, the message from former Director General Health Services, Kashmir, Dr Saleem Ur Rehman, who had taken the initiative of establishing Geriatric OPD at JLNM Hospital, was read out, “Due to development in public health and medicine in recent past, there is an increase in life expectancy resulting in increase in older adult population. In this backdrop, health sector needs to prepare itself to deal with the challenges imposed by the ailing elderly population. Elderly people are special and have special needs and requirements for their overall wellbeing,” his message read.

In her inaugural address, Dr Samina Mufti, Medical Superintendent, JLNM Hospital said: “On this day we are reminded of our responsibility of universal health coverage and make our hospital accessible, affordable, to older people for comprehensive health care delivery including promotive, preventive and curative and rehabilitative health care.”

She added: “Starting a separate registration counter, where they do not have to wait in long queues and OPD services is a humble start towards that direction. I wish that the Insurance schemes ready for launch take care of the elderly  so that the increased life span years are quality ones”.

Renowned writer and poet, Farooq Nazki, Guest of Honour on the occasion recited a poem in Kashmiri on old age.

While speaking on the occasion, Incharge Department of Geriatric Medicine, JLNM Hospital, Dr. Zubair Saleem said “We cannot fight ageing, it is inevitable and normal. However, in order to prevent mental trauma inflicted on our elderly by discriminating them on the basis of their age, we can stand against ageism”.

He further added, “Elderly people should know the difference between process of ageing and course of illness. This will help them to live a healthy and dignified life”.

CEO, Licot Formulations, Sheikh Ashiq thanked all dignitaries and delegates for attending the CME and reiterated his support to such academic events for the cause of elderly and takes it as a social responsibility.

The event was attended by the physicians and other doctors across Kashmir Division.