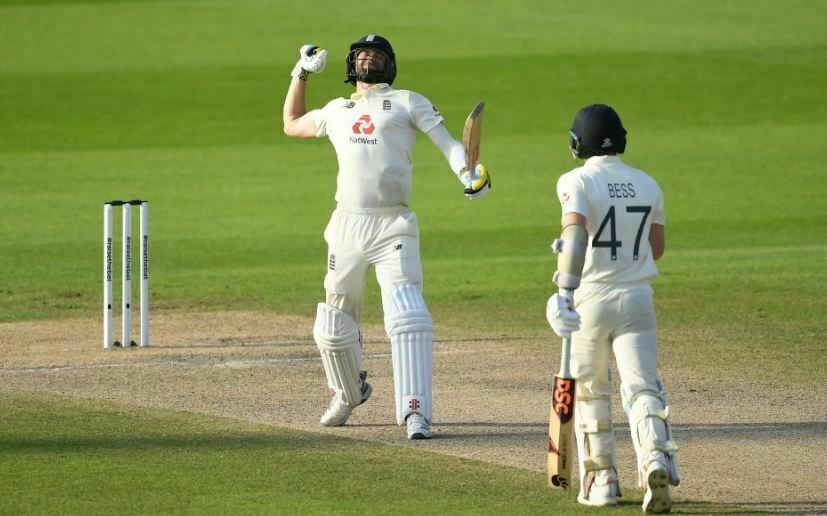 Manchester:  Chris Woakes and Jos Buttler led England to an extraordinary three-wicket win over Pakistan in the first Test between the two sides at Old Trafford on Saturday. Finding themselves at 117/5 while chasing a target of 277, Woakes and Buttler’s ballistic 139-run stand for the seventh wicket brought England right back into the chase.

Woakes hung on after Buttler’s dismissal throughout the see-saw final proceedings on Day 4. At the end, it was an outside edge off Woakes’ bat off the two-over old second new ball that went between the Pakistani slip cordon to the boundary to bring up the winning runs.

It was Buttler and Woakes’ counter knock that stopped the Pakistani charge in the second session. The visitors looked capable of finishing the match within the first hour of the third session when England captain Joe Root, Dom Sibley, Ben Stokes and Ollie Pope all fell in a short period.

The pair continued their rampage after Tea and both soon raced to their respective half centuries. When Pakistan captain Azhar Ali pulled his field back to restrict the flow of boundaries, the batsmen started taking more singles and kept the pressure on the fielders.

The 100-run stand between the pair came up in 123 balls but then as the required runs went below 50, the run rate also went down. With that, the visitors started getting chances as well with Yasir getting an edge off Woakes that bounced just in front of Babar Azam at second slip.

Azhar then burnt two reviews in consecutive overs against Buttler and Woakes off Yasir and Shadab respectively. Eventually, Mohammad Rizwan’s chatter from behind the stumps indicated that Pakistan were looking to see out the old ball but the steady flow of singles meant that England’s deficit kept reducing with each passing over.

With three overs to go for the second new ball, Buttler gave an impetus to England’s cause with a six off Shadab deep into the stands behind cow corner. England’s deficit went into the 20s and the Pakistani shoulders drooped. But the twist came in the very next over with Buttler missing a reverse sweep off Yasir and the ball hitting his pads. The fielding side went up in appeal and the umpire raised his finger.

Buttler took one of the three reviews England had left. The delay it took for the producers to load up the ball tracker after checking for an edge didn’t help the collective tension at Old Trafford and once it did come up, it upheld the umpire’s call and Buttler had to walk on 75 off 101 balls.

Broad, who came next, lifted some of the pressure that the hosts may have been under with a four off the second ball he faced against Shadab Khan.

Pakistan took the new ball as soon as it was available and it was Shaheen Afridi who took it first up. He came closest when Woakes inside-edged an outswinger onto his pads but that was followed by a no-ball, two runs and then a boundary by Woakes straight down the ground.

In the next over, Yasir’s full delivery hit Broad on the toes plumb in front of the stumps. Dom Bess replaced him and saw out the rest of the over.

Afridi continued down the other end and bowled a ripper of a delivery, searing in at full length and swinging late. Woakes pushed across the line and the ball took his inside edge but it only ended up going between the Pakistani slip cordon for four. Woakes stood unbeaten on 84 as England registered a scintillating win.