‘Dignity for all’: Give us a place to live in Kashmir, say displaced Pandits 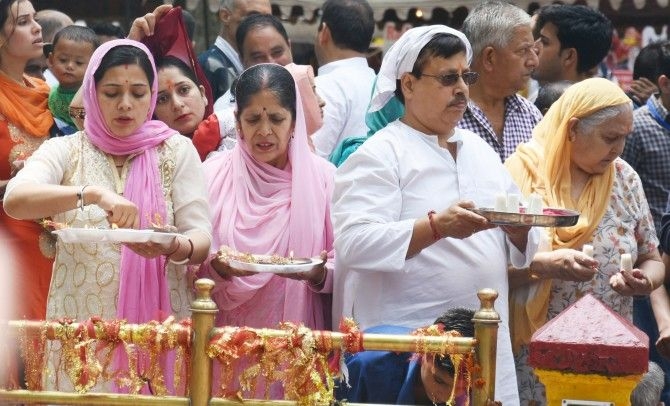 Srinagar: Calling for joint efforts to pave the way for their return, the displaced Kashmir Pandits on Tuesday urged the government to provide them a ‘place’ so that they could resettle in the Valley.

“Today a foundation was laid to pave the way for our return as people from all walks of life came here for ‘Navreh Milan’. Though the government did not do anything for us, we came searching for our brothers. We have one request….tell us where do we Pandits live? Give us a place to live here. We don’t have a place to live. The government and political parties should give us a commitment as we want to and resettle in this ‘Peer-Veare’ and live together (with Muslims),” said Reconciliation, Return & Rehabilitations of Migrants chairman, Satish Mahaldar.

He made the comments during the ‘Navreh Milan’ function held at the Sheetal Nath temple, Kral Khud.

Mahaldar, who was leading a group of migrant Kashmiri Pandits, said they had organised the function to build bonds.

“We are celebrating the day as ‘Partnership for Peace – Dignity for All’. We want to build bonds and that is why we have invited all to “Navreh Milan’. We are glad that people from all walks of life and leaders from different political parties came here on our invitation,” he said.

Presently based in New Delhi, Mahaldar had led a delegation of Pandits to the Valley twice in 2019 and announced that 419 migrants were willing to return to Kashmir. Before the abrogation of Article 370 on August 5, 2019, the Hurriyat and Pandits had also formed a joint committee that was supposed to talk to a cross-section of people in the Valley to decide on the ways and means for their return and rehabilitation.

Speaking on the occasion, CPI-M leader MY Tarigami called for joint efforts to bring back migrant Kashmiri Pandits.

“After 31 years, we got a chance to celebrate Navreh together at this temple. We all have to jointly strive to bring them back,” he said.

“I visited a few temples in Srinagar and apart from the KPs living in Kashmir, I could see a large number of Pandits who had migrated from the Valley, participating in the religious rituals including hawans. I spoke to many and could gauge that the process of return of KPs has started from today,” he said.