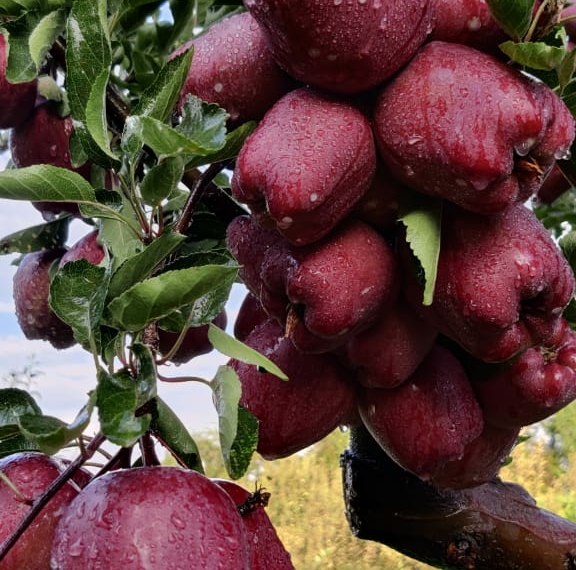 Srinagar: Even as the fruit growers in Kashmir are presently harvesting the traditional delicious apples, several new types grown here especially the Gala strains and super varieties have already flooded the markets outside the Valley.

Mostly grown after the year 2015, the new varieties have found favour with the apple growers in the Valley as these are harvested earlier than the delicious ones and fetch better prices.

Khan is a popular grower of the area as he has grafted around 50 apple varieties at his Pinjura orchard in Shopian.

He said the new varieties were sold at higher rates than the delicious varieties.

“Gala strains have got a very good market and are harvested in August-September. We sold a 10 kg box for around Rs. 1000 to Rs. 12000. Jaipur is the main market for this product but after customers started liking the taste and colour, it now goes to all mandis and few types are even exported outside India. A single tree can produce 17 crates of apples and fetch an average amount of Rs. 25000 for a grower,” said Khan.

“Super varieties too sell for around Rs. 1100 per 10 kg box and are harvested earlier. This variety has no issues with colour. On the contrary, the delicious variety that we are presently harvesting sells for Rs. 600 a box as of now. At the most, it will fetch us Rs. 800 to 900 per box depending on the quality,” he added.

However, others are wary of growing the new apple varieties in the Valley.

“I must admit that I am tempted to grow these new high-density varieties that give us better margins. However, many advised me against the same as they fear it has got many lacunae. I am still weighing the pros and cons,” said Ishfaq Ahmed, an apple grower from Baramulla in North Kashmir.